This website is reader-supported. When you buy through links on our site, we may earn an affiliate commission.
Home » Reviews » Snow Joe 324E Review 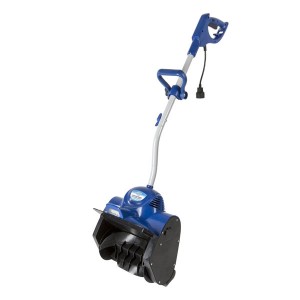 Winter snow fall can be a lot of fun, especially if you have kids: snowmen, snow forts, snow angels and sledding are all wonderful parts of winter. The same is true for watching snow quietly accumulate while you’re bundled up and warm indoors. Winter snow fall would be great except for one aspect of it: we all have to clear it from our driveways, porches, and walks if we don’t want to be snowed in over the winter. And shoveling snow is a serious chore that can leave our backs aching and shoulders sore. The obvious alternative – snow blowers – are expensive and bulky, and aren’t really necessary if you just have a short walk or narrow driveway. Fortunately, there is a compromise: electric snow shovels. These machines are lightweight and compact, and take much of the work out of shoveling snow. The Snow Joe 324E provides all these advantages, and has a few extra perks of its own.

The Snow Joe 324E is an electric snow shovel with a powerful 10 Amp motor that can clear up to 300 pounds of snow per minute and throw that snow up to 20 feet away. It has great product specs, including its 12 inch clearance width and 6 inch tall snow cut depth. It is compact and lightweight for easier storage indoors and easier maneuverability on stairs and narrow walks. And it has a convenient, 1.2 Watt LED headlight so you can better see what you are doing if you’re shoveling snow when the dark winter night has set in early.

There are a few minor drawbacks to the Snow Joe 324E, though. Like many electric snow shovels, it may tend to struggle with wet snow, and it only throws snow in one direction. In addition, it tends to leave a thin layer of snow behind that will need to be treated with rock salt, and its plastic rotor blades are not particularly durable. It’s also one of the more expensive electric snow shovels on the market today.

I will cover all of these positive features and drawbacks in more detail in the Pros and Cons sections. I’ll also provide a detailed product comparison table so you can see how the Snow Joe 324E stacks up to the competition, and discuss pricing in more depth.

The Snow Joe 324E is an electric snow shovel with overall dimensions of 14.5 x 13.5 x 54 inches. It has a push button starter system and a powerful 10 amp motor. It boasts a clearing width of 12 inches, and it has a snow cut depth that is 6 inches tall.

The Snow Joe 324E has a snow clearance capacity of up to 300 pounds per minute, and it can throw snow up to 20 feet away thanks to its powerful motor. The handle is ergonomically designed and has an additional grip mounted on the front for easier use. It weighs 12.5 pounds. It is covered for two years under a manufacturer’s warranty.

The Snow Joe 324E is an electric snow shovel that is designed to pack a powerful snow clearing ability into a compact, lightweight body. It has overall dimensions of just 14.5 x 13.5 x 54 inches, which means you should have almost no trouble finding enough storage space for it in a hall closet or the front foyer of your house. That way, it will always be on hand when you need it; you will not have to trek out to the garage in the middle of a snow storm to get it, but can simply start clearing snow right out of your front door. It also weighs just 12.5 pounds. That means it will be small enough as well as light enough to use on porch stairs or narrower walkways easily. And its clearance width is only slightly smaller than its overall width, so you don’t have to worry about leaving snow behind on stairs or edges.

The clearance width of the Snow Joe 324E is twelve inches, which makes it one of the wider clearances available on an electric snow shovel today. It has a cutting depth of six inches, which will allow homeowners in most regions of the country to handle the average snow fall in their area easily. Because the Snow Joe 324Ehas a powerful 10 amp motor, it packs enough of a punch to handle up to 300 pounds of snow per minute, and it can throw snow up to 20 feet away. That should be more than far enough to keep smaller walkways and driveways clear with ease.

The Snow Joe 324E is one of the more expensive electric snow shovels of its size and clearance capacity on the market today, but I do think it is reasonably priced in spite of that. It has a powerful motor that can handle big jobs over many winters without burning out, and it has convenient perks such as a powerful LED headlight and ergonomic design.

There are a number of excellent features that help to make the Snow Joe 324E one of the better electric snow shovels available on the market today. It has a powerful motor that ensure it can throw a lot of snow per minute, and throw it a considerable distance, too. It has a 12 inch clearance width and a 6 inch snow cut height. And it has convenient additional features such as an ergonomically designed handle and a powerful LED headlight.

When you are buying a new electric snow shovel, its clearing width, snow cut height, and pounds per minute clearing capacity are the three most important things to look at. In all three areas, the Snow Joe 324E delivers. Its clearance is wide and high, and it can throw up to 300 pounds of snow per minute at a distance of 20 feet. Extra perks like the powerful LED light only increase the overall convenience this machine offers.

There are a few areas in which the Snow Joe 324E is not altogether perfect, however. Some of these are issues that tend to be fairly common in all electric snow shovels, such as the fact that it may struggle with wet, heavy snow, and only throws snow in one direction. Others, such as the fact that it tends to leave a thin layer of snow behind and has plastic rotor blades, are particular to this model.

I should mention that I do not consider any of these drawbacks to be particularly serious, and I don’t think any of them will negatively affect the performance of the Snow Joe 324E. Some of them are simply par for the course when you are using an electric snow shovel. Those that are particular to this model are not especially egregious, and won’t cause problems if the shovel is used properly. And while the shovel is pricey, as I said I think it’s worth it.

Of course, lists of Pros and Cons – however detailed they might be – are not able to give you a complete picture of the qualities of a particular machine, especially relative to what else is out there. The best way to do that is to use Pros and Cons lists in tandem with some comparison shopping. This gives you a better idea of how a product stacks up to its competition. The following table compares the Snow Joe 324E with the Snow Joe 323E and the Sylvania 3612SYG250OBL.

As you can see, the Snow Joe 324E has the most powerful motor of the three machines, but it also has the biggest overall dimensions. The other Snow Joe shovel, the 323E, has a slightly wider clearance and higher cutting depth. It can also handle 30% more snow per minute than the 324E and throw it farther. The 323E weighs a bit more than the 324E. The 324E has the advantage that it is more lightweight and is the only one with a headlight.

There are a few major areas of concern when you are shopping for a new electric snow shovel: how wide is its clearance, how high is its cutting depth and what is its pound per minute clearing capacity? Other concerns, while of some importance, will not have as direct an effect on a snow shovel’s performance and your snow clearing experience. Let’s take another look at the Pros and Cons of the Snow Joe 324E.

In terms of clearance and cutting depth, the Snow Joe 324E is at or slightly above average for electric snow shovels its size. It can clear 300 pounds of snow per minute and throw snow up to 20 feet away. It also has convenient additional features such as an ergonomic handle and LED headlight.

The fact that it may struggle with wetter snow, and the fact that it only throws snow in one direction, are not uncommon problems for electric snow shovels to have. However the Snow Joe 324E also leaves a thin layer of snow behind, and its rotor blades are not particularly durable. In addition to these issues, it is one of the more expensive electric snow shovels available.

There are a number of considerable advantages to using an electric snow shovel over a manual shovel or a snow blower. Electric snow shovels do most of the work associated with clearing snow from your property, which saves your back and shoulders a lot of strain. But they are also compact and lightweight enough that you should have little trouble finding storage space for them or maneuvering them around your driveway or using them on a porch or deck. The Snow Joe 324E affords its owner all of the advantages of any electric snow shovel, but it has a few extra perks of its own. It has a 12 inch wide clearance and 6 inch tall cutting depth, which ensures you will be able to handle all but the biggest storms quickly and efficiently. In addition, it has convenient extra features such as an LED headlight and ergonomically designed handle. While this snow shovel is a bit expensive, it is a solid machine.

As I have mentioned above, the Snow Joe 324E is one of the more expensive electric snow shovels in its size class and with comparable clearance capacity. There are plenty of electric snow shovels with 12 inch clearance widths and 6 inch snow cut depths that can clear 300 pounds of snow per minute or more – and many of them are nowhere near as expensive as this one. At the same time, the Snow Joe 324E is lightweight and compact and boasts additional features, such as the LED headlight, which help to make the pricing seem more or less reasonable. While it’s expensive, I do not think this snow shovel is overpriced.

Click the button to get the best deal for Snow Joe 324ECheck Price
Hey, nice to meet you!