This website is reader-supported. When you buy through links on our site, we may earn an affiliate commission.
Home » Reviews » Toro 38361 Review 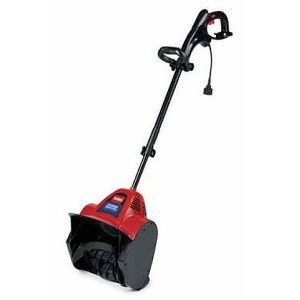 If you live in an area that does not typically experience very heavy snow fall through the winter, you do not necessarily need a big, bulky snow blower to keep your property clear. This is especially true if you do not have a very wide driveway or long sidewalk on your property. If you just have a short walk or a deck to keep cleared off, you can do it with an electric snow thrower. These handy little machines can clear light snow fall very quickly and efficiently, and they take almost all of the work out of the job. No more backaches or sore shoulders after you are finished shoveling the walk. Instead, with an electric snow shovel such as the Toro 38361, all you have to do is plug it in, turn it on and guide it back and forth. The shovel does the rest of the work.

The Toro 38361 is an electric snow shovel with overall dimensions of 15 x 12 x 52 inches and a clearing width of 12 inches. It can handle snow fall of up to six inches, which makes it one of the more robust electric snow shovels of its size class. It has a 7.5 amp motor, which allows the rotor to throw snow up to 20 feet away and clear up to 300 pounds of snow per minute. The shovel is ergonomically designed, compact and lightweight for easier use. And it’s very quiet and environmentally friendly. I’ll go over each of these features in more detail in the Pros section of the review.

Then, in the Cons section, I will discuss the areas in which the Toro 38361 has limitations or is not quite perfect. The shovel may have difficulty getting through wet, heavy snow, and its auger is made of plastic, which may not be durable. It only throws snow in one direction, and it is limited by the length of the power cord. After that I will compare the Toro 38361 to two similar snow shovels and wrap up with a discussion of its pricing.

The Toro 38361 is an electric snow shovel with a 12 inch wide clearing width and overall dimensions of 15 x 12 x 52 inches. It has a 7.5 amp motor with a push button starter mechanism. The snow shovel can cut through snow fall up to a depth of six inches.

The Toro 38361 can clear up to 300 pounds of snow per minute, and it can throw snow up to 20 feet away. Its handle is adjustable and ergonomically designed in order to reduce back strain when it is being used. It weighs 12.5 pounds. It comes with a 2 year manufacturer’s warranty.

The Toro 38361 is an electric snow shovel that is designed to take a lot of the work out of keeping your walkways, deck, and porch steps clear of snow during the winter. It allows you to enjoy the efficiency and convenience of a power snow remover without having to deal with the expense or drawbacks of a gas powered snow blower. The Toro 38361 has overall dimensions of just 15 x 12 x 52 inches, which make it much more compact than even the smallest snow blowers. These dimensions are compact enough that you could easily store the Toro 38361 indoors, in your front foyer or in a hall closet, where it will be out of the way but conveniently accessible at a moment’s notice. The Toro 38361 weighs just 12.5 pounds, which means it will be a cinch to maneuver it around your property, regardless of your agree or strength level.

The Toro 38361 can clear up to 300 pounds of snow per minute, and it has a snow clearing width of 12 inches, which means it will be able to efficiently take care of small jobs quickly and efficiently, and have you back indoors and warming up in a matter of minutes. It can clear a snow fall depth of up to six inches, which is more than most comparably sized electric snow shovels. This means users in more areas of the country will be able to use the Toro 38361 to keep their walks and decks clear.

The Toro 38361 is a bit more expensive than many comparably sized electric snow shovels, but I do think the price is reasonable. This is because it has a higher depth of snow clearing capacity than many similar snow shovels. And Toro is a great company that makes reliable, high performance machines, and the Toro 38361 is no exception.

There are a number of great features offered by the Toro 38361. It can clear up to six inches of snow fall, which is more than most similar electric snow shovels. It has a clearance capacity of up to 300 pounds of snow per minute and a clearance width of twelve inches. The shovel is ergonomically designed and compact and lightweight, which means it will be more convenient to use and store. And it is quiet and environmentally friendly.

On the other hand, no product can be completely trouble free, and the Toro 38361 is not either. Like many other electric snow shovels, it may have some difficulty with wet, heavy snow. And it only throws snow forward, which some users may find problematic. Its auger is plastic, and the shovel is limited in range by its power cord. Finally, it is on the expensive side of comparably sized snow shovels.

All things considered, I do not think that any of these Cons is serious enough to take away too much from any of the great features the Toro 38361 has to offer. Some of these Cons are simply due to the limitations that all electric snow shovels face, and while the plastic auger may not be very durable, I do think it will hold up to repeated use on certain jobs. Overall this is a good electric shovel in spite of these drawbacks.

I think that Pros and Cons lists, while very useful in their own right, are limited in terms of what they can tell us about a particular product. As a result I always recommend that my readers use my Pros and Cons lists in addition to a thorough product comparison. This gives you a better idea of how a particular product stacks up to those made by its competitors. The following table looks at the product specs of the Toro 38361 as well as the Snow Joe 322P and the Greenworks 26012.

As you can see, the Toro 38361 has the highest clearance of the three snow shovels, at six inches. It also has a capacity of 300 pounds per minute, as opposed to 250 pounds per minute for either of the other shovels. It weighs 1/2 a pound more than the Snow Joe but is lighter than the Greenworks. All three shovels can throw snow the same distance, up to 20 feet away, and all have 12 inch clearance widths.

Clearance width and snow cut depth, along with an electric snow shovel’s pounds per minute capacity, are the three most important things to consider when you are shopping for a new one. In addition, you want them to be lightweight and compact for easier use. Let’s take a look at the Toro 38361’s Pros and Cons before we wrap up.

The Toro 38361 can cut up to six inches of snow, which is 50% more than other electric snow shovels can, and it has a capacity of up to 300 pounds per minute. This means that it is one of the most efficient electric snow shovels of its size. In addition, it’s ergonomically designed, quiet, and easy to use and store.

Like almost all electric snow shovels, the Toro 38361 may struggle with wetter, heavier snow, and it has a plastic auger, which may not be the most durable. It only throws snow forward, which may be problematic for some users, and it is a bit more expensive than other shovels. Finally, it may be limited in range due to the power cord.

If you have a small property without a particularly wide driveway or very long front walk, you can enjoy the benefits of a power snow shovel without having to buy a bulky, expensive snow blower. Electric snow shovels such as the Toro 38361 take the majority of the work out of keeping your drive or walkways clear of snow, reduce the amount of back pain or shoulder strain you experience while doing so, and are much more convenient for small areas. They weigh much less and have smaller overall footprints than big snow blowers, making them easier to use and find storage space for them. And they are quieter and more environmentally friendly as well. The Toro 38361 provides you with all of the benefits of any electric snow shovel, but it also has a 6 inch cutting depth capacity and can clear up to 300 pounds of snow per minute, making it one of the more efficient electric snow shovels on the market today.

Click the button to get the best deal for Toro 38361Check Price
Hey, nice to meet you!