This website is reader-supported. When you buy through links on our site, we may earn an affiliate commission.
Home » Reviews » Earthwise SN70010 Review 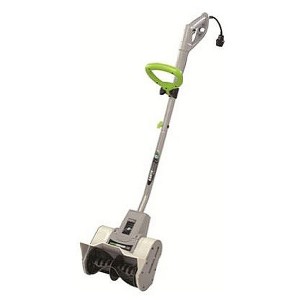 Keeping your sidewalk, deck, or patio clear of snow during the winter is not a task that any of us particularly enjoy, and that is in no small part due to the fact that it is hard work that can often leave our back or shoulders aching from the strain. This can be the case even if we do not have a lot of area to clear or live in a region that only experiences relatively light snow fall. Fortunately, there is an alternative to using a manual snow shovel that is not bulky, noisy and expensive like a snow blower, but can still clear light snow fall quickly and efficiently from smaller areas. Electric snow shovels are designed to be lightweight and compact, but still able to clear snow with minimal effort on your part. The Earthwise SN70010 is a great electric snow shovel for homeowners who only have a small area to clear.

The Earthwise SN70010 is an electric snow shovel with overall dimensions of just 11.8 x 8.7 x 53 inches and weighs just 11 pounds, which will make it easy to store in an indoor closet so that it is readily available whenever snow falls and highly maneuverable. It has a snow removal capacity of up to 300 pounds per minute, which is on the higher end of that range. Its handle and overall design are intended to minimize back and shoulder strain, and it is quiet and environmentally friendly. It has a snow cut depth of at least five inches.

There are a few areas in which the Earthwise SN70010 is not quite perfect: it has a clearance width of only ten inches, which is on the lower end of that range, and in spite of its powerful 9 amp motor, it may struggle with wet snow. The shovel only throws snow in one direction – forward – which some users may find difficult to work with. The shovel is limited in its range by its power cord, and considering its clearance width, it is one of the more expensive shovels available. I’ll discuss all of the shovel’s great features and drawbacks in the Pros and Cons section. I’ll also compare it to similar models and discuss pricing in more detail.

The Earthwise SN70010 is an electric snow shovel with a 9 amp motor, overall dimensions of 11.8 x 8.7 x 53 inches, and weighs 11 pounds. It plugs into an extension cord and has a push button starter. Its clearing width is 10 inches, and it has a snow cut depth of five inches.

The Earthwise SN70010 has a clearing capacity of up to 300 pounds per minute, which is on the high end of the scale for a shovel of its size. It can throw snow up to 25 feet. Its handle is ergonomically designed for greater comfort. The shovel comes with a 2 year warranty.

Earthwise SN70010 is an electric snow shovel that can help take a lot of the work associated with keeping your walk or porch clear of snow right out of the equation. It has a powerful 9 amp motor that can help you with most light snow falls. Its overall dimensions of 11.8 x 8.7 x 53 inches house an auger that has a clearance width of 10 inches and a snow cut depth of five inches. The ten inch width is a bit small for comparably priced snow shovels, but it is perfect for clearing porch stairs or small areas quickly and efficiently. And the shovel’s overall dimensions mean that it will be very easy to find enough storage space for it in a hall closet, which means you will not have to trek out to the garage or tool shed to retrieve it: you can start clearing snow right out your front door.

The Earthwise SN70010 weighs just 11 pounds, and it is ergonomically designed to reduce back and shoulder strain. Its size, weight and ergonomic design mean that just about anyone will be able to use it easily, regardless of their age or strength level. The shovel is quiet and environmentally friendly, and produces zero emissions at the point of use.

There are a few drawbacks associated with the Earthwise SN70010: it may have some difficulty with wetter snow, it only throws snow in one direction, and its clearance width is a bit small. I will cover these in more detail in the Cons section, but I should mention that I do not think any of these represent poor design or manufacturing. The Earthwise SN70010 is on the higher end of the price range for an electric snow shovel of its size, but I do not think it is overpriced considering its snow clearance capacity and snow cut depth.

There are a number of areas in which the Earthwise SN70010 really performs well. It’s one of the more lightweight and compact electric snow shovels available today, and even so it has one of the higher clearing capacities of comparably priced snow shovels. It has a convenient design, and it’s quiet and environmentally friendly. It has a five inch snow cut depth, which is enough for most regions of the U.S. Let’s look at each of these Pros in turn.

Any one of these Pros is very important when you are shopping for a new electric snow shovel, and the Earthwise SN70010 comes through on all of them. This is a great machine for those of you who just have a short, narrow driveway, or live in an apartment or condo and only have to keep a deck or patio clear. It’s an efficient machine that can be easily tucked away in a closet to be ready whenever you need it.

At the same time, the Earthwise SN70010 is not entirely perfect, and there are a number of areas that could stand to see a bit of improvement. The shovel’s clearance width is on the narrow end, which could be problematic, and it may struggle with wet, heavy snow. It only throws snow in one direction – forward – and its range is limited by a power cord. Finally, it’s on the pricier side, considering its clearance width.

I should stress that I do not consider any of these Cons to be the kind of serious issue that would take away from the Pros at all. Instead, they are indicative of limitations that are the result of the intended design of the machine: it’s meant to be used on smaller areas such as walks or patios, and only in regions that do not experience very heavy snowfall. Still, it’s important to be aware of even the smallest flaws before you purchase an expensive new appliance.

In addition to Pros and Cons lists, which are useful on their own but do not give a complete picture of how a particular machine compares to what else is available on the market, I always recommend that my readers do some comparison shopping. This way, you can see how one appliance stacks up to the industry standard as well as what competitors are offering. The following table compares the product specs of the Earthwise SN70010 with those of the Snow Joe 324E and the Power Smart DB5004.

As you can see, the Earthwise SN70010 has the smallest clearance width of the three machines, although it also has the most compact footprint. The other two machines have a higher snow cut depth as well. The Snow Joe can clear the same capacity as the Earthwise, while the Power Smart clears 30 percent more. The Earthwise has the farthest throwing distance, and is also the most lightweight of the three.

There are a number of important features to look at when you are shopping for a new electric snow shovel. You want it to be able to efficiently and quickly clear snow at a high pounds per minute rate, but you also want it to be compact and lightweight so it is easy to use and store. Let’s look at the Pros and Cons of the Earthwise SN70010 once more before we conclude.

The Earthwise SN70010 weighs just 11 pounds, and it has the kind of compact dimensions that will make it easy to use and store in a hall closet. It has an average snow clearance capacity per minute, and it’s designed to be easy to use, quiet, and environmentally friendly. It also has a five inch snow cut depth.

The clearance width of the Earthwise SN70010 is on the narrower side, which makes it perfect for very small jobs but may reduce efficiency on larger ones. It may struggle with wet snow, and only throws snow forward. It’s tethered to a power cord, and it is a bit on the expensive side.

If you have a property that does not have a particularly wide driveway or an overly long walk, you do not need to purchase a bulky, expensive snow blower to keep it clear of light snow fall over the winter. But on the other hand, using a manual snow shovel can be a difficult and soreness-inducing chore. An electric snow shovel like the Earthwise SN70010 splits the difference between the two. These machines are lightweight and compact, and take most of the work out of clearing snow from your walk. The Earthwise SN70010 is one of the lighter and smaller electric snow shovels available, and it still has an impressive snow clearance capacity and snow cut depth, although its clearance width is on the smaller side. All things considered, though, this is a solid electric snow shovel that will perform well under the right conditions. If you only have to clear a short walk, patio, or porch stairs, this could be the perfect machine for you.

As I mentioned in the Cons section, the Earthwise SN70010 has a bit of a high price tag compared to other electric snow shovels with similar abilities, especially considering the fact that it has a clearance width of just ten inches. At the same time, for the right household, the price may be worth it. It has a high enough clearance capacity and snow cut depth that it will be able to consistently clear light snow fall from smaller areas quickly and efficiently. And it is not the most expensive electric snow shovel out there; most homeowners will still find it is fairly affordable.

Click the button to get the best deal for Earthwise SN70010Check Price
Hey, nice to meet you!