This website is reader-supported. When you buy through links on our site, we may earn an affiliate commission.
Home » Reviews » Sylvania 3612SYG250OBL Review 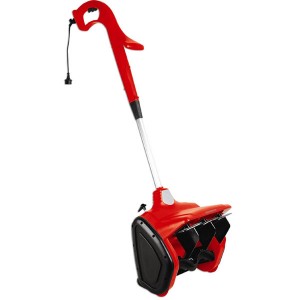 When you have a smaller property without a very wide driveway or particularly long walk, there is no reason to spend a lot of money on a big, bulky snow blower that is only going to take up a lot of room in your garage. There is such a thing as a tool that is too large to be efficient for smaller jobs. But at the same time, you do not want to wear your back out and strain your shoulders so much that you have to recover every time you clear your driveway of snow, as you would with a manual snow shovel. The perfect compromise between the two extremes, in my opinion, is the electric snow shovel. These brilliant little machines are small enough to easily store in a hall closet or in your front foyer, where they are always available whenever it snows. And they do the vast majority of the work associated with snow clearance for you.

The Sylvania 3612SYG250OBL is an example of the kind of compact electric snow shovel that can help you clear snow from your driveway, walk, or patio quickly and efficiently. It is not going to take up a lot of room, wherever you decide to store it, because it has a small footprint. But don’t let its size fool you: this machine still packs a considerable amount of power. It has a 9 amp motor that can generate up to 3500 rpm, which allows it to clear up to 250 pounds of snow per minute and throw that snow up to 20 feet away.

Unlike a snow blower, the Sylvania 3612SYG250OBL is quiet and environmentally friendly, and it produces zero emissions at the point of use. It’s ergonomically designed, so you never have to worry about straining your back again. And it has an efficient 12 inch snow clearing width so you can finish the job more quickly and be back indoors sooner.

I will cover all of this snow shovel’s great features in more detail in the Pros section. And I’ll go over the areas in which it is less than perfect in the Cons section so you have a clear picture of its strengths and weaknesses. I’ll also provide a handy product comparison guide and discuss pricing in some detail.

The Sylvania 3612SYG250OBL is an electric snow shovel that has overall dimensions of 13 x 13 x 55 inches. It has a push button starter that ensures quick starts every time. Its motor is a powerful 9 amps, and the shovel has an overall clearance width of 12 inches.

The snow cut depth on the Sylvania 3612SYG250OBL is four inches. It has a snow clearing capacity of up to 250 pounds per minute, and it can throw snow up to 20 feet away. Its handle is ergonomically designed, and the shovel weighs 17 pounds. It is under warranty for 2 years.

The Sylvania 3612SYG250OBL is a compact electric snow shovel that is designed to have the maximum clearance width in the smallest overall package. And it really performs well in that category. The snow shovel has overall dimensions of just 13 x 13 x 55 inches, but it still manages to have a 12 inch clearance width. 12 inches is about average for an electric snow shovel, but many other shovels that have comparable clearance widths have much wider overall footprints, which can present problems with storage or maneuverability. Because the overall width on the Sylvania 3612SYG250OBL is just one inch wider than its clearance, you will not have to worry about leaving snow behind on stairs or the edges of walkways when you use it, since it gets almost flush with the edge every time.

The Sylvania 3612SYG250OBL has a powerful 9 amp motor that generates 3500 rpm, which is enough power to easily clear up to 250 pounds of snow per minute and throw that snow up to 20 feet away. Along with its wide snow clearance, its pound per minute capacity allows the Sylvania 3612SYG250OBL to help you quickly and efficiently clear small areas. You can move a lot of snow with this shovel, and clear walks and driveways in fewer passes. Fewer passes mean you will be indoors warming up sooner and out of the cold more quickly.

There are a few minor issues associated with the Sylvania 3612SYG250OBL. It has a fairly short snow cut depth, which could be problematic in regions that experience heavier snow fall, and it is a bit heavy when compared to similar models. It also has many of the problems associated with the majority of electric snow shovels, including difficulty with wet snow. But overall this is a fairly solid electric snow shovel at a reasonable price.

There are a number of attractive features on the Sylvania 3612SYG250OBL. It is a powerful electric snow shovel, and it can clear a large volume of snow relatively quickly. It is quiet and produces zero emissions. And in spite of the fact that it has a 12 inch wide clearance, it still has a very compact footprint. In addition, the machine is ergonomically designed to alleviate back and shoulder strain. Let’s look at each of these Pros in more detail.

The overall design and dimensions of the Sylvania 3612SYG250OBL give you the kind of wide clearance and high snow removal capacity you want on an electric snow shovel, but manage to provide them in a compact package that is easy to maneuver and store. This combination of compact size with high clearance ability is, in my opinion, what separates this electric snow shovel from the majority of similar models. You get convenience and ability wrapped up in one parcel.

There are a number of areas, however, in which the Sylvania 3612SYG250OBL does not perform as well as I would like, in spite of its clearance ability and small size. It has a snow cut depth that is on the smaller side, which could be limiting, and it weighs a lot, which some users may find makes it difficult to use. Beyond that, however, its drawbacks are the kind that are fairly common to electric snow shovels of this caliber.

The snow cut depth can be a significant issue for users who live in regions of the United States that receive fairly heavy snow storms – those that routinely drop more than six inches. And the show shovel’s weight is a bit high, especially considering its size and clearance width. Apart from those two issues, the others are common to electric snow shovels, and while they certainly are worth mentioning, I do not think they will present significant problems.

In addition to Pros and Cons lists, which give you an idea of the qualities and drawbacks a particular product has to offer, the next best way to see whether a product is right for you is by doing some comparison shopping. This way, you can get a better picture of what the market as a whole has to offer, as well as how a given electric snow shovel stacks up as compared to its competition.

As you can see, the Sylvania 3612SYG250OBL is the smallest of the three shovels, all of which have comparable clearance widths. But the other two shovels have considerably higher snow cut depths and have higher pound per minute capacities as well. This is in spite of the fact that the Sylvania 3612SYG250OBL has one of the more powerful motors and weighs a bit more than either of the other two machines. Beyond these features, the three shovels are fairly similar.

A few areas are more important than others when you are looking into buying a new electric snow shovel. Chief among them are its clearance width, snow cut depth, pound per minute capacity and overall footprint. These features will determine the overall efficiency and ease of use of a given snow shovel. Let’s take another look at the Pros and Cons of the Sylvania 3612SYG250OBL to see whether it delivers satisfactorily in these areas.

The powerful motor on the Sylvania 3612SYG250OBL allows it to clear up to 250 pounds of snow per minute and throw it up to 20 feet away. And while its footprint is very compact, at just 13 x 13 x 55 inches, it nevertheless has a 12 inch wide clearance.

At the same time, the Sylvania 3612SYG250OBL has a fairly short snow cut depth, at only four inches. This will limit the regions in which it can be used successfully, and all but rules out using it in areas that experience very heavy snow fall on a regular basis. Beyond that, I do not think the problems it presents will prove to be very serious.

When you have a small property, you do not need to purchase a bulky, expensive snow blower, but you also probably are sick and tired of shoveling snow by hand. When this is the case, you can opt for a convenient electric snow shovel. But there are a number of considerations to keep in mind when you are shopping for a new electric snow shovel. You want a machine that has a compact overall footprint so it’s easy to use and find storage space for it. But at the same time you do not want to sacrifice performance, which is defined primarily in terms of how much snow it can clear per minute, how wide its clearance is, and how tall its snow cut depth is. While the Sylvania 3612SYG250OBL has a relatively short snow cut depth, it still manages to pack a 12 inch clearance width into a fairly compact package, and it can clear an average volume of snow per minute. Overall this is a good electric snow shovel for the right conditions.

The price tag on the Sylvania 3612SYG250OBL puts it at the higher end of the range for electric snow shovels with comparable clearance widths and snow clearing capacity, and this is especially true for shovels with shorter snow cut heights. While it will perform well under the right conditions, if you live in an area that experiences a lot of snow fall and gets occasional heavy storms in your area, you may not want to spend this kind of money on an electric snow shovel that may not be able to perform well. But if you want a compact machine that can clear light snow fall, the price tag is reasonable.

Click the button to get the best deal for Sylvania 3612SYG250OBLCheck Price
Hey, nice to meet you!