This website is reader-supported. When you buy through links on our site, we may earn an affiliate commission.
Home » Guides » Electric Snow Shovel Buying Guide

These are the 8 best electric snow shovels based on product quality, customer satisfaction, and price: 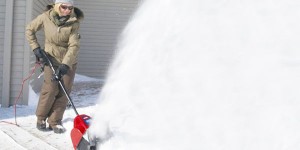 One of the aspects of winter we can all look forward to is a good snowfall, and I don’t consider it really winter until we have gotten at least a few inches of snow. But at the same time, if you have a deck or patio to keep clear, or a parking space to dig out, snow storms spell one thing: work. When I was much younger than I am now, I actually enjoyed the chore of shoveling the snow. It can be a great workout, and if the driveway or walkway you are clearing is not too long, then clearing a light snow accumulation is not a terribly difficult task. But these days, shoveling snow manually is a job that is frankly outdated.

Nowadays the latest technological advances have provided tools that take a lot of the work out of clearing your driveway. But if your driveway or walkways are not very long, purchasing a big, overly powerful snow blower might not be the best investment. A great middle ground between snow blowers and manually shoveling the walk is the electric snow shovel.

These machines are lightweight and fairly easy to use. Some electric snow shovels have a paddle style auger that pushes the snow forward like a powerful broom. Other models are designed to throw snow several feet in front of them like a mini snow blower. They are designed to handle a few inches of snow accumulation over a relatively small area such as a short sidewalk or one car driveway. Electric snow shovels are also particularly great for clearing porches, decks, or stairways.

The auger on an electric snow shovel makes contact with the ground as you push it through the snow, so they are not useful to clear snow on uneven or unpaved ground. They also will not handle accumulations of more than four or five inches, so if you are experiencing heavy snowfall, you will have to begin clearing it as it falls and before it gets too deep. Otherwise an electric snow shovel will not be effective.

Electric snow shovels are an excellent upgrade for people who do not have the back or arm strength necessary to shovel snow manually, and who do not live in an area that gets the kind of snow accumulation that would make a snow blower necessary. Electric snow shovels have clearance widths of twelve inches or more and generally weigh less than fifteen pounds. Snow blowers are considerably larger and heavier, which may make them unwieldy for some people. 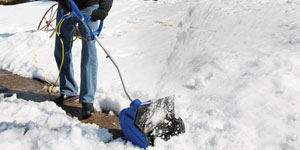 There are quite a few reasons why opting for an electric snow shovel is a great choice if you have the kind of property it is designed to work with. These machines are perfect for smaller properties in areas of the United States where snow storms do not typically drop more than a few inches at a time. In these areas, you can almost get away with just using a heavy duty salt mixture to keep your pathways clean, but you will occasionally need to clear snow as well. In this case, a snow blower may be too big and heavy duty to be efficient, let alone worth the purchase price or costs of maintenance and fuel. An electric snow shovel, on the other hand, can help you finish the job quickly and efficiently. And it will not break your budget for the winter.

In both cases, an electric snow shovel will be a lot easier for persons with disabilities, senior citizens, or those of us who do not have the necessary strength level to clear snow manually. If you do not have a particularly large driveway, or if you just have to keep your walkway or deck clear of occasional snow accumulation this winter, an electric snow shovel is the way to go.

Electric snow shovels are very compact, and their footprint – which is generally going to be less than two square feet – makes them very easy to find storage space in your garage or tool shed for one. In fact, their small size combined with the fact that they are so lightweight means that you could even hang your electric snow shovel on a sturdy nail on the wall of your tool shed or garage. They will not even take up much more room than your old manual snow shovel does. In fact, an electric snow shovel has a small enough footprint that you could even keep it indoors in your utility room, broom closet or back porch. This is advantageous if you are only using it to clear walkways or decks. You can start clearing snow right out the door, instead of negotiating slippery ground covered in ice and snow on your way out to the garage before you can get started.

Compare that to the large footprint and bulky weight of a snow blower, which will need quite a bit more storage space and can pretty much only be kept in your garage, and you can see the obvious advantages to finding storage for the smaller electric snow blower. When you do not live in an area that gets a lot of heavy snow, it doesn’t make sense to have your snow clearing tools taking up a lot of space in your garage.

Electric snow shovels are also considerably easier to use than snow blowers. You will not need any mechanical skill to keep an electric snow shovel performing well, whereas snow blowers – particularly gas powered and two-stage snow blowers – will require you to perform periodic maintenance. There are no spark plugs to change or air filters to clean with an electric snow shovel, and you will never have to worry about changing the oil. You also will not have to keep smelly gas cans or messy oil cans in your garage. All you need is an extension cord that can reach the end of your walkway or driveway, and you are ready to start clearing snow.

Electric snow shovels are very friendly to the environment, which is a matter of increasing concern to consumers these days. Just take a look at how popular hybrid cars or energy efficient appliances have become, and you can see that there is a general trend towards more environmentally friendly products in our home. Electric snow shovels do not produce any carbon emissions, which means you can be confident that buying one will help you do your part for the environment. And they use a lot less electricity than electric snow blowers, so you will be reducing your overall energy consumption by using one as well.

In addition to saving the environment, buying an electric snow shovel will afford you considerable monetary savings as well. These tools are far less expensive than two-stage or even single-stage snow blowers, which can get very expensive rather quickly. Electric snow shovels, on the other hand, are the least expensive power snow removal products on the market today. These economical machines typically cost about half of what some of the least expensive snow blowers do, and are less than a fifth of the price of many two-stage snow blowers. And because they run on electricity instead of expensive gasoline, you will continue to enjoy savings every time you use one.

2a. The snow shovel’s power usage 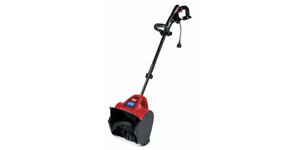 2b. The snow shovel’s intake height 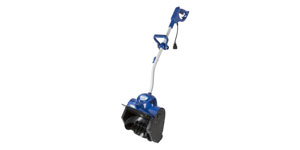 But with a six inch intake height, instead of a three or four inch intake height, you will not have to worry about a bigger snow accumulation. A smaller intake height might make you have to clear your deck or walkway a few times while snow is still accumulating. Not only can this be a rather unpleasant task, it can expose you to freezing temperatures and unsafe conditions. 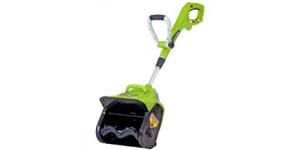 An electric snow shovel that is equipped with a wider clearing width will be able to cover the same amount of ground in fewer passes. That translates to less time spent going back and forth on your patio, deck or driveway. Simply stated, the wider the intake width of the electric snow shovel, the less time you will have to spend outside in the cold, inclement weather and the sooner you will be back indoors, warming up with a hot drink and a cozy blanket. And if you are clearing a walkway, a bigger electric snow shovel might be able to quickly and efficiently clear the whole thing on just one pass. 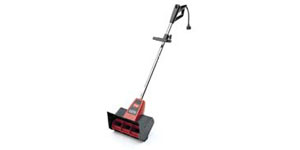 Most electric show shovels have a power drive system in which the auger, which is the paddle like spindle that scoops up snow and throws it forward, also helps to propel the snow shovel forward. But a number of less expensive electric snow shovels do not offer an auger assisted power drive system, and instead require the user to supply all of the power needed to keep the snow shovel moving forward. Which kind you decide to opt for is basically up to you and depends on how much money you want to spend as well as whether you think you will be able to push a twelve or fifteen pound electric snow shovel through the kind of snow accumulation you typically experience in your area.

Pushing an electric snow shovel that does not propel itself is not terribly difficult. It is certainly easier than pushing a manual shovel through heavy snow. On the other hand, part of the reason for switching to an electric snow shovel is the added convenience it affords you, so it might make perfect sense to spend the extra ten or twenty percent in order to get one that has an auger assisted power drive system. 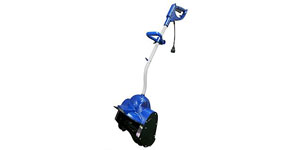 More inexpensive electric snow shovels offer a fairly basic package: you will get a machine that can assist you with shoveling snow that is less than six inches deep over a relatively small area. That in and of itself can be a huge help during the winter months, especially if you do not want or are not able to use a manual snow shovel to clear your driveway, walkways, or deck. But a number of electric snow shovels offer a few additional accessories for a higher price.

Some electric snow shovels come equipped with LED headlights, which can be advantageous if you find you have to shovel snow in the early morning or late afternoon when there is not enough daylight to see what you are doing. Others have conveniently heated handles, which is a great bonus. Auxiliary handles, which are typically mounted on the front of the main handle, help you to maneuver the electric snow shovel even more easily. And I highly recommend buying one that has a locking mechanism for your extension cord so it does not pull out while you are clearing snow. As an electric snow shovel adds more accessories, it can get more expensive, but the added convenience may be worth it.

These are the 8 best electric snow shovels based on product quality, customer satisfaction, and price: