This website is reader-supported. When you buy through links on our site, we may earn an affiliate commission.
Home » Guides » Gas Snow Blower Buying Guide

These are the 10 best gas snow blowers based on product quality, customer satisfaction, and price: 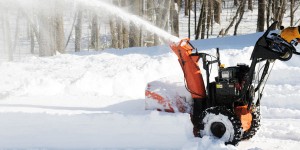 A gas powered snow blower is an excellent choice if you have a driveway that is any longer than about ten yards or so. For shorter driveways, you can get away with an electric snow blower if the snowfall in your area is rather moderate. That means you do not get snow storms that drop more than three or four inches at a time. If you have a longer driveway or if you expect to get snow storms that drop upwards of six inches at a time, you will want to get the kind of snow blower that is big enough and has enough power to handle that kind of snowfall. The obvious choice in this situation is a gas powered snow blower.

Intake heights are important if you live in an area that experiences periodic or regular heavy snowfall. Snow blowers with taller intake heights are able to clear deeper snow. If you have a snow blower with a short intake height, during heavy snow storms you may find yourself having to be out clearing snow even as it is still accumulating. This is less than ideal for several obvious reasons. Therefore if you regularly or even occasionally have snow storms that drop more than eight or ten inches of snow at one time, you should consider getting a snow blower with a tall enough intake height to handle that kind of accumulation.

Gas powered snow blowers come in three grades: consumer grade, mid-size, and professional grade. Each one is designed to perform differently for different conditions. Consumer grade snow blowers will include both single-stage and smaller two-stage models. These will outperform single-stage electric models, and have larger intakes and wider augers than electric models. They will be able to handle a moderate amount of snow accumulation on a small to medium sized driveway.

Professional grade gas snow blowers are the beasts of the bunch. These are constructed with heavy duty components like durable steel frames and cast iron gear cases. They have auger widths that range from two feet to nearly four feet, and intake heights of up to two feet. These are generally ideal for groundskeepers or landscaping professionals who need to clear a lot of snow quickly. They are also the most expensive of the three classes, with price tags that are almost twice as high as mid-size snow blowers and as much as three times as high as consumer grade snow blowers.

When you are shopping for a gas snow blower, the main things to keep in mind are how much area you will have to clear, how often it snows in your area and how much accumulation you tend to receive, and how much money you are willing to spend up front. 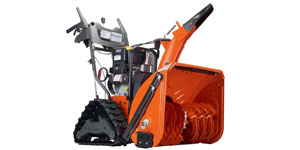 The engine size on your gas snow blower is important because it will determine a number of other aspects of the snow blower’s performance. Consumer grade snow blowers have engine sizes that are close to 200 cubic centimeters. Mid-size snow blowers have engines that range from 200 to 400 cc, and professional grade snow blowers’ engine sizes range from about 300 to more than 400 cc. The engine size will determine how much gas the snow blower consumes as well as the total horsepower it produces. Bigger engines can also support faster drive systems for easier maneuvering. And snow blowers with more powerful engines can support heavier, more durable parts for better performance over the long term. But bigger engines also cost more, and if your driveway is not particularly long you will not necessarily need a huge engine to get the job done, so shop with your needs in mind. 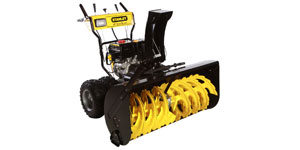 The width of the auger is one of the most important considerations after engine size. Auger width will determine how many passes it takes to clear your driveway; snow blowers with wider augers are able to clear an area in fewer passes, which means they can get the job done in less time. That is important because no one wants to be out clearing snow in clod, inclement weather for too long. And they shouldn’t: an important safety consideration when you are clearing your driveway of snow is avoiding exposure to freezing temperatures or subzero wind chill for too long. It can be a very good practice to figure out the width of your driveway and then break that figure down into how many passes a snow blower with a particular auger width will clear it in. You will be surprised at how much of a difference a mere six inches in auger width can make. 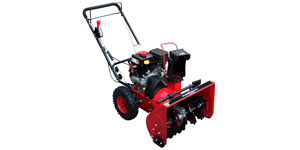 While auger height determines how quickly a gas snow blower can clear a given area, intake height determines how much snow it can handle on a single pass. You are probably quite familiar with how much snow you can expect in your area, but it can be a very good idea to take a look at the kind of snowfall your area has experienced over the last few years. This will give you a better picture of the kind of snowfall patterns your region has and a better idea of what kind of intake height you will need. If you regularly or even periodically get hit with major snow storms, then you should get a snow blower with a taller intake height. But if you only get a few inches at a time, then you will probably be just fine with a snow blower that has a shorter intake height. 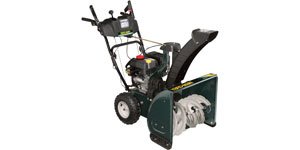 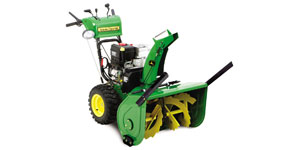 Finally, depending on the kind of snow blower you decide to buy and how much you are willing to spend on it, there are a number of accessories you may need to consider. Higher grade snow blowers will have a number of accessories that can make the job a lot easier. Halogen headlights are an excellent addition, since it can snow at any time of day or night and you may be clearing your driveway in the dark on short winter days. Tire chains can help give the snow blower’s wheels more traction to better navigate slippery surfaces. Plastic “cabs” that protect you from the elements are useful if you will be clearing snow while it is falling. Drift cutters attach to the auger housing to help knock down snow drifts so that the auger can scoop them up. And skid shoes help balance the auger if you are maneuvering on uneven ground. 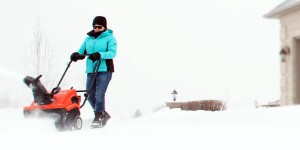 A single-stage gas snow blower will be more than sufficient if you have a short or moderately long driveway, and if the driveway is paved. Single stage snow blowers cannot be used safely on driveways that are not paved, or that are covered in gravel. This is because the auger on a single stage gas snow blower makes contact with the ground as it scoops up snow, which means it will also scoop up any gravel, twigs, or other detritus it contacts. It will fling the gravel along with the snow, which can both damage the snow blower’s throwing chute and auger as well as pose a serious safety hazard to anyone who might be in the way.

Because the auger on a single stage snow blower makes contact with the ground as it scoops up snow, it is also able to propel the snow blower forward as it does so. That allows single stage snow blowers to be self-propelled without requiring an extra drive system to power the wheels. This means they can be supported by smaller engines that tend to be a bit more fuel efficient than the engines required for two stage snow blowers. It also means that you may have to supply a bit of additional power to move them through the snow, and if your driveway is on a steep slope, single-stage snow blowers will tend to pull sideways on it. This should not be too difficult to handle for a lot of us, but if you feel you may not have the strength level necessary for this kind of labor, you may want to look into a snow blower with a drive system.

Single-stage gas snow blowers generally fall into the consumer grade category of snow blowers. That means they will have auger widths between about 18 and 24 inches. While that makes them absolutely ideal for mid-size, one car driveways, since they can generally clear these in less than ten passes, it makes them less than perfect for wider driveways. They have intake heights that allow them to handle snow accumulation of up to about eight inches. That means that in a heavy blizzard, you may have to clear snow more than once as it is accumulating. But if you do not regularly experience snow accumulation at blizzard levels, a single-stage snow blower will do the job just fine.

For the average American household with a paved mid-size driveway, a single stage gas snow blower will be more than sufficient to clear snow effectively. These machines are lightweight and have a compact enough footprint that you will not have to worry about finding enough storage space for one in your garage. They have a considerably longer range than electric snow blowers, and with them you are freed from extension cords. And they have a price range that is considerably less than that of mid-size or professional grade two-stage mowers, but they still are made of durable parts and provide comparable quality of performance. 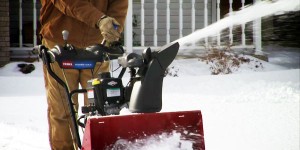 Gas two-stage mowers also have drive systems that propel their wheels forward, which takes a lot of the work out of maneuvering the snow blower around your driveway. Because the wheels are what propel the snow blower, snow chains are particularly useful on these machines, as they will give the wheels superior traction and make them better able to handle icy patches with ease. The drive system on the wheels also makes two-stage mowers better equipped to handle steep inclines without pulling to one side or needing an extra push to keep them going.

These snow blowers have bigger engines – they are in the 200 to 400 cubic centimeter range, depending on whether you are looking at a mid-size or professional grade gas two-stage snow blower. The bigger engines require more gas but also provide a lot more power to the snow blower, which means they will have wider augers and taller intake heights. The auger widths on two-stage snow blowers start at two feet and can go as wide as two and a half feet. And their intake heights range from 20 to 24 inches. That means they will easily handle all but the most extreme blizzards.

These are the 10 best gas snow blowers based on product quality, customer satisfaction, and price: