This website is reader-supported. When you buy through links on our site, we may earn an affiliate commission.
Home » Reviews » Power Smart 7653 Review 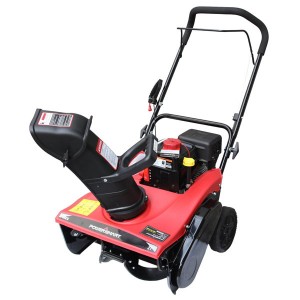 If you live in a region of the country that gets a fair amount of snow fall from one winter storm to the next, you probably already understand the importance of owning a powerful, reliable snow blower that can help you keep your driveway clear. Every year, over 10,000 people, young and old, wind up in the hospital with snow shoveling related injuries, and for senior citizens and persons who are at risk for heart attack, shoveling snow by hand is downright dangerous. Furthermore, if you have a large driveway, it is simply inefficient to clear it by hand. A single stage gas powered snow blower is the best tool for clearing a big, paved driveway or long, paved walkway. These machines pack the kind of power you need to efficiently and quickly clear these spaces. The Power Smart 7653 has a number of great features that make it a solid single stage snow blower.

The Power Smart 7653 is a gas powered single stage snow blower with a 208 cubic centimeter, 4-cycle engine. The snow blower has a clearing width of 21 inches, which is perfect for medium and large driveways. It has a ten inch snow cut depth, which in most regions of the United States should be sufficient to handle the kind of snow fall an average storm can drop. The snow blower is designed to be as ergonomic as possible, and all but eliminate back and shoulder strain that are all too common when clearing snow during the winter.

At the same time, there are a number of limitations in the product specs and design of the Power Smart 7653 that make it less than ideal for certain conditions. Its snow cut depth will not be able to handle severe winter storms, and its clearance capacity is just 900 pounds per minute. The engine on the Power Smart 7653 is exposed, non-CARB compliant, and rather loud. And considering its size and other limitations, the snow blower is rather expensive.

When compared to similar models, the Power Smart 7653 is about average, and falls in the middle of most categories. Overall it is not a bad snow blower, and will work fine under the right conditions.

The Power Smart 7653 is a single stage gas snow blower with dimensions of 22 x 29 x 23 inches. It has a button push start and a 208 cubic centimeter, 4-cycle engine. It has a clearing width of 21 inches and a snow cut depth of ten inches.

The Power Smart 7653 has a capacity per minute of 900 pounds, and it can throw snow up to 25 feet away. It is manually pushed by the operator. Its handle is ergonomically designed. Its snow chute rotates manually 180 degrees about its center radius. It has compact wheels and weighs 95 pounds. It comes with a 1 year warranty.

The Power Smart 7653 is a gas powered single stage snow blower with a four stroke engine with 208 cubic centimeters of displacement. It has overall dimensions of 22 x 29 x 23 inches and a clearance width that is 21 inches. The footprint of the Power Smart 7653 is small enough that it will be fairly easy to find storage space for it in your garage or tool shed, and it also means that you will not have trouble maneuvering it in the tighter spaces in your property. The 21 inch clearance is on the higher end for single stage snow blowers, and it means that you will be able to use it to quickly and efficiently handle medium and even big driveways. The wide clearance allows you to clear an area in fewer passes than you could with a smaller machine, which saves you time and will have you back indoors where it’s warm before you know it.

There are a few great design features offered on the Power Smart 7653, such as its adjustable, ergonomically designed handle that will reduce back and shoulder strain. It also has an extra large snow chute that will be less prone to blockages and better equipped to handle wetter, slushier snow without getting clogged. The chute conveniently rotates 180 degrees.

The Power Smart 7653 has a ten inch snow cut depth, which should be sufficient for homeowners in most regions of the United States, but limits the extent of snow fall that this machine can easily handle. The engine on the snow blower is exposed and fairly noisy, which may present issues if you have neighbors who like to sleep in. The engine is also not particularly fuel efficient and is not compliant with California Air Resources Board emissions standards, which limits the number of States it can be purchased in.

There are a number of features on the Power Smart 7653 that make it perfect for the right kind of job. It has a powerful engine that is low maintenance and provides enough power to throw 900 pounds of snow per minute. It has a 21 inch clearing width and excellent design features like an ergonomic handle and extra large snow chute.

The Power Smart 7653 has excellent design features, a powerful 208 cc engine, and a number of other Pros that make it ideal for homeowners who live in regions that experience moderate snow fall but still have big properties to take care of. It doesn’t have a huge footprint, is easy to use, and clears snow all the way to the surface of the driveway.

There are still a number of limitations as to what the Power Smart 7653 is able to accomplish, and it also has a few design features that are less than optimal. Its snow cut depth is only ten inches and its per-minute capacity is also on the low end. Its engine is exposed, fairly noisy, and non-CARB compliant. And even with all these drawbacks, it is still fairly expensive.

While none of the Cons for the Power Smart 7653 are particularly egregious by themselves, when you put them all together and consider the fact that it has an above average price for a single stage gas powered snow blower, you may have second thoughts about buying it. That is not to say that it will not perform reliably or clear snow well, but I do not think its list price and drawbacks are worth it, considering its size limitations.

It is always a good idea to do some comparison shopping to determine whether a particular product is in fact highly priced or if similarly priced and less expensive models offer the same features. The following table compares the Power Smart 7653 to two similar models. The Poulan Pro PR621 is about the same price, and the Toro Power Clear 418 is a bit cheaper. Let’s take a look.

When you are shopping for a new single stage snow blower, the most important areas are the size and make of its engine, its clearance width and snow cut depth, and its price compared to similar models. In several of these areas, the Power Smart 7653 really performs, but it falls short in others.

The Power Smart 7653 does have a very powerful engine with high displacement, and its clearing width is on the high end. It has certain design features that are great, like the ergonomic handle and extra large chute and it will do quite well on medium and large driveways.

On the other hand, the Power Smart 7653 has a limited snow cut depth, and its per-minute capacity is not the highest. Its engine is exposed, noisy, not fuel efficient and produces a lot of emissions. All things considered, it’s somewhat highly priced.

A big driveway requires a big snow blower with a powerful engine to keep it reliably clear through the winter, and the Power Smart 7653 certainly delivers in those areas. It also has thoughtful design features like an ergonomic handle for more comfort and an extra large snow chute that is less prone to getting clogged up – which is frankly a feature I wish more snow blowers had. For the right conditions, and on most medium and larger suburban driveways, this machine will perform well. But in other areas it falls short. It does not have a very high snow cut depth and will not provide a per-minute capacity that is as high as I would like. Its engine is way too loud and produces a lot of emissions. While this is not a bad snow blower by any stretch of the imagination, the fact remains that you can do much better for the asking price.

The price tag on the Power Smart 7653 is the main sticking point for me. I do not think it is a bad single stage snow blower by a long shot – but I know that you can find snow blowers with comparable clearance widths that also have higher snow cut depths and higher per-minute clearing capacities. Those machines also have quieter engines that run more cleanly and are CARB compliant. A lot of more expensive single stage gas snow blowers have high price tags that are more justifiable than this one. So when it comes right down to it, compared to the competition, I think the Power Smart 7653 is somewhat highly priced.

Click the button to get the best deal for Power Smart 7653Check Price
Hey, nice to meet you!