This website is reader-supported. When you buy through links on our site, we may earn an affiliate commission.
Home » Reviews » Snapper 1696002 Review 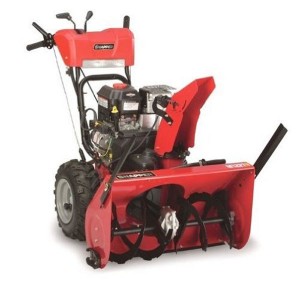 When a serious blizzard is coming your way and the weatherman is predicting a foot or more of snow accumulation in your area, you are going to want to be prepared for it. This is true whether you have a medium sized, paved driveway or a long, unpaved one. You definitely do not want to be caught with just a flimsy shovel, but you also do not want to have a snow blower that is not going to be able to perform well. What you need is the kind of heavy duty, durable snow blower like the Snapper 1696002. This machine has everything you need to tackle big, tough snow fall quickly and efficiently. There is almost no accumulation of snow that the Snapper 1696002 can’t handle. And whether you are in the Midwest or far up in Northern Canada, this is a snow blower that can handle whatever winter brings.

The Snapper 1696002 is equipped with one of the widest clearances you can find on a snow blower today, which means that it is going to be able to get your property cleared in fewer passes – and have you outside for a shorter amount of time – than any other model. Its wide, durable auger is built to charge right though deep, densely packed snow drifts as well as wet, slushy snow. And because it has one of the highest snow cut depths as well, you can sit indoors and watch the snow pile up to nearly two feet deep before you need to get out there and start clearing it.

The Snapper 1696002 is a gas powered two stage snow blower that weighs 254 pounds and has overall dimensions of 35.8 x 50.5 x 50.5 inches. It has a Briggs & Stratton 1150 Snow Series engine with a displacement of 250 cubic centimeters and an overhead valve design that provides more horsepower and torque to the auger and drive train.

Because of its powerful engine, the Snapper 1696002 can support an auger that is over two feet wide and a snow cut depth that is nearly as tall. It also has eight speeds to choose from and big, Arctic Trace wheels that never lose traction, even under the worst conditions. It can throw snow up to 40 feet away. The Snapper 1696002 comes with a two year warranty.

The Snapper 1696002 is nothing if it is not big and powerful. This is a snow blower that is built to handle the toughest jobs without breaking a sweat, and that will be apparent as soon as you get it out of the box. There is a bit of assembly required, but for the most part it is fairly light and can be done with regular household tools. Just attach the snow chute and deflector, tighten the handle and wheels, and you are all set. Then, fill the fuel tank with gas and check the oil, and the Snapper 1696002 is ready to go.

And the Snapper 1696002 is ready for just about anything. With the kind of extra wide clearance you can only find on the biggest and most powerful snow blowers, the Snapper 1696002 is well equipped to clear big areas in as few passes as possible, which means you can get your driveway clear much faster than you could with a smaller snow blower. That will have you back indoors and warming up sooner than ever. Plus, it has a snow cut depth that is nearly two feet high: that means you can let the snow finish falling before you have to go out there and clear it, no matter how deep it’s expected to get.

The Snapper 1696002 has unique controls that are easier to use: you only need one hand to control the propulsion, freeing up the other to control the chute direction and angle, which means you don’t ever have to slow down or stop while you are using the Snapper 1696002. And the machine is made out of very durable parts that are built to last over the long term, even after hundreds of hours of use under the most difficult conditions. This is one solid snow blower that is built to perform.

There is really a lot to like on the Snapper 1696002. This is the kind of really big, powerful snow blower that has the capability to dig your driveway out from under the most serious winter blizzards quickly and efficiently. In addition to a big clearance and powerful engine, the Snapper 1696002 also has lots of elegant design features that help to make it a breeze to use. It’s one of the best all-around snow blowers out there.

As you can see, the Snapper 1696002 is well equipped with every feature you could ever need to tackle big, tough jobs faster than ever. This is a powerful, tough machine with a very solid engine, an extra high clearance width and the kind of high intake that will have you ready to deal with the most severe winter storms. This s a great snow blower that is very well designed, built tough and ready for anything.

Even though the Snapper 1696002 is such an outstanding snow blower, there are a few areas in which it is just shy of perfect. I do not think that any of the Cons I am about to discuss take away significantly from all of the great Pros that it has to offer. But I do think it is important to know exactly what you are buying. With that in mind, let’s take a look at them.

I think you will probably agree with me when I say that none of these Cons presents the kind of serious drawbacks that other snow blowers have in their design or construction: there are no problems with the outstanding engine, the fuel lines, or anything like that on the Snapper 1696002. These are for the most part relatively minor issues – things that, were they improved upon, would make the Snapper 1696002 an elite machine. But it’s still one of the best ones out there.

Of course, the best way to figure out whether a particular snow blower is the best one for you is by doing a bit of comparison shopping. All of the Pros and Cons lists in the world are not going to tell you how it stacks up when evaluated against models made by its competition – the only way you can do that is by actually comparing them. Let’s take a look – I think you’ll be pleased.

As you can see, the Snapper 1696002 is one of the biggest and best residential snow blowers out there – so much so that it even stacks up well when you compare it to a monster like the Husqvarna. In fact, when you look at clearance width and snow cut depth, the Snapper 1696002 has the best specs in each category. This is truly one of the best snow blowers on the market today.

The Snapper 1696002 is one very impressive snow blower. When you compare it to other snow blowers – even bigger, more heavy duty ones – it still has some of the best product specs. But before you make your final decision to buy it, I think it’s a good idea to take one more look at the Pros and Cons, just to be sure.

The Snapper 1696002 has one of the best engines you can find on a snow blower today, and because of that it is able to easily support a wider clearance and higher snow cut depth than other models. It also has great features that are unique to it, like the Arctic Trace tires and Free Hand control.

Those few issues that the Snapper 1696002 does present are so minor they almost do not bear mentioning. The first two are normal for this kind of machine, and the last three are not the kind of serious flaws that would warrant any concerns over its performance. Overall this is one of the best models out there.

You need to be prepared for serious winter storms, whether you have a long, unpaved driveway or an average suburban property with paved driveway and walks. You never know when the next big blizzard is going to drop more than a foot of snow on your area, and you do not want to be stuck with a snow blower that is now going to be able to get the job done. With the Snapper 1696002, you are well prepared for anything Old Man Winter can bring your way.

This is a snow blower that has everything you need to take care of big jobs quickly and efficiently. It has the widest clearance and one of the highest snow cut depths you can find on any snow blower out there. And it is supported by one of the best engines you can find – one that is specifically manufactured for a snow blower like this one. The Snapper 1696002 is a great snow blower.

Click the button to get the best deal for Snapper 1696002Check Price
Hey, nice to meet you!