This website is reader-supported. When you buy through links on our site, we may earn an affiliate commission.
Home » Reviews » Poulan Pro PR291E30 Review 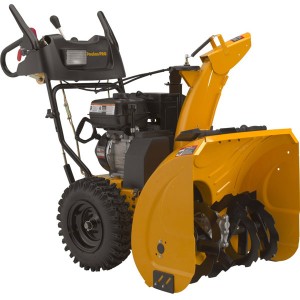 When you are a homeowner with a long driveway who lives in an area that experiences fairly heavy snow accumulation through the winter, you need a machine that can handle whatever Mother Nature can throw at you. That means you need a powerful snow blower that can provide a high snow cut depth to deal with whatever the biggest snow storms can drop on your region. You also want to make sure your snow blower has the kind of extra wide clearance that can allow you to clear your driveway quickly and efficiently.

The best machines for dealing with this kind of situation are gas powered two stage snow blowers. They have the kind of powerful engines that can support extra wide, extra high intakes and throw snow farther than smaller snow blowers can. With one of these workhorses in your garage, you will be ready for whatever snowfall accumulates.

The Poulan Pro PR291E30 is such a big, powerful snow blower that once you have it ready to go in your garage, you will actually be looking forward to the next big snow storm in your area. It has a convenient push button start so you will no longer be straining your shoulders pulling on a heavy starter cord. Once it gets going, you will be pleased with its overall fuel efficiency and low emissions output – it is even compliant with California Air Resources Board emissions standards, so you can use it anywhere in the United States.

The clearance width on the Poulan Pro PR291E30 is a full 30 inches, which will allow you to clear snow from your property quickly and efficiently. And this big monster has a 23 inch snow cut depth, so there is virtually no snow storm it can’t handle with ease – no matter how much accumulation you receive, the Poulan Pro PR291E30 can handle it. And even with its size and weight, this snow blower is easy to use: thanks to its big, deep treaded tires, self-propelled drive and convenient power steering you will have no trouble maneuvering it around your property and over uneven terrain.

The Poulan Pro PR291E30 is a two-stage gas snow blower with dimensions of 37 x 50.9 x 32 inches. It has a push button start. It has a 291 cubic centimeter Overhead Valve 4-cycle engine. It has a self-propelled drive system with 4 forward speeds and 2 reverse speeds.

The clearing width on the Poulan Pro PR291E30 is 30 inches, and the snow blower’s snow cut depth is 23 inches. It can throw snow up to 35 feet, and its snow chute rotates 180 degrees manually. It has an ergonomic handle and power steering, and a convenient floodlight for use on dark days. It has rubber wheels that are 16 x 5 inches, and it weighs 268 pounds. It comes with a 2 year warranty.

Once you get the Poulan Pro PR291E30 out of its shipping crate, you will see that it requires almost no assembly and is pretty much completely ready to go. In just a few minutes, you can get it set up, fill the gas tank, and be ready to start clearing snow. All that is left at that point is waiting for a good snow storm! The Poulan Pro PR291E30 has the kind of ultra high snow cut depth that will allow you to clear the deepest snow drifts easily – it is a full 23 inches tall. You will be able to easily and quickly clear deep snow fall while your neighbors are calling in professional snow plows to clear their driveways.

The Poulan Pro PR291E30 has a wide clearance as well, which is important. It is 30 inches wide, which is enough to clear an entire sidewalk on a single pass. It also means you will be able to clear your driveway in just a few passes, which will save you lots of time and effort and have you back indoors before you know it. And because it has big, deeply treaded tires, a self-propelled drive system, and power steering, this baby is very easy to maneuver around your property. Even on long driveways with steep inclines, this snow blower is easy to use.

This snow blower is also designed to be fuel efficient and CARB-compliant, which will be a relief to consumers in California or any of the other 14 states that enforce these restrictions. It also means you will not have to spend as much money on gas to fuel it, and its engine will require less maintenance to keep it running smoothly. If you live in a region that gets hit with heavy snow storms during the winter, you want a machine like this in your garage.

When a winter storm hits, you want to be able to clear your property as quickly and efficiently as possible, but a lot of snow blowers don’t have what it takes to get the job done. And many two-stage gas snow blowers are gas guzzlers that pour fumes into the air. With the Poulan Pro PR291E30, you get the kind of snow clearing power you need to remove snow quickly, and you have high fuel efficiency and reduced emissions.

The Poulan Pro PR291E30 30-inch two-stage gas snow blower is perfect for homeowners with big driveways who live in regions that receive a lot of snow fall during the winter. It is fuel-efficient and can handle big snow storms easily and efficiently. Its variable speeds and power steering make it easy to maneuver around your driveway and tackle tough jobs quickly.

With all of these great features, you are going to find it difficult to believe that there are areas in which the Poulan Pro PR291E30 is not quite perfect. It is so easy to use – startup is a snap, and the snow blower practically maneuvers itself around the driveway with its self-propelled drive and power steering – that it doesn’t seen like it could have any drawbacks. But let’s examine some of its problems.

Taking all of these Cons into consideration, you can see that none of them speak to flaws in the design or manufacture of the machine, and they are all heavily outweighed by all of the Pros the machine has to offer. This is a big snow blower designed to take care of heavy snow fall, and it’s expected that it is going to be noisy and heavy. What’s important is that it can handle tough jobs.

When you are making a big purchase like a two-stage snow blower, you want to be sure you are getting the best product for your price range. Therefore it makes sense to do some comparison shopping before you settle on one model or another. While most of these machines are self-propelled and have similar engines, they differ in terms of clearance width and intake height, and some have more accessories than others. The chart below compares the Poulan Pro PR291E30 with two similar models.

As you can see, there are a few differences from one model to the next. The Poulan Pro PR291E30 has the highest clearance width and snow cut depth of the three snow blowers, and its engine has considerably higher displacement than either of the other two models. It is also the only one equipped with a headlight of any kind, and it has the biggest wheels. At the same time it has the largest dimensions and weighs the most of the three.

Depending on what region you live in, you may get a steady number of snow storms through the winter that drop moderate amounts of snow fall, or a lot of big, deep blizzards that drop a lot of snow at once. In either case, you need a snow blower that will be able to consistently handle whatever winter can bring your way. The following pros and cons should help you decide if the Poulan Pro PR291E30 is right for you.

The clearance width and snow cut depth are probably the most enticing features on the Poulan Pro PR291E30. They ensure that you will be able to consistently handle whatever snow fall could come your way, and do so quickly and efficiently. The power steering, push button start and self propelled drive system are all guaranteed to make using this machine easy and hassle-free.

The Poulan Pro PR291E30 is a big beast of a machine designed to tackle tough jobs, so naturally it is going to be heavy and have a large footprint. But if you do not have a long driveway and do not live in an area that experiences heavy snow fall, it may not be the right machine for your needs.

The Poulan Pro PR291E30 is a tough workhorse of a snow blower that is designed to handle deep snow fall quickly and efficiently. If you live in an area of the country that gets frequent and heavy snow accumulation through the winter, you want a machine in your garage that you can count on to clear your property easily. A big clearance width and high snow cut depth are important aspects of any snow blower, but they are particularly useful on a two-stage snow blower with the kind of design and manufacturing that can support them.

The Poulan Pro PR291E30 has a powerful 4-cycle engine with a 291 cc displacement. The engine is able to support not only the auger and impeller fan, but also provides enough power to drive the snow blower at four variable forward speeds and two reverse speeds. In addition, it has power steering to make maneuvering it even easier and a convenient headlight so you can see what you’re doing.

The Poulan Pro PR291E30 is not exactly cheap, but for a powerful two-stage snow blower with an extra wide clearance width and snow cut depth of nearly two feet, it is very reasonably priced. There are plenty of comparable two-stage snow blowers that are considerably more expensive than this model. And those models do not have the kind of great design features that the Poulan Pro PR291E30 does. So while this snow blower is definitely a big investment, it is also a good one: this snow blower will be at your side ready to clear deep snow through many tough winters for years to come.

Click the button to get the best deal for Poulan Pro PR291E30Check Price
Hey, nice to meet you!