This website is reader-supported. When you buy through links on our site, we may earn an affiliate commission.
Home » Reviews » Snapper 1696001 Review 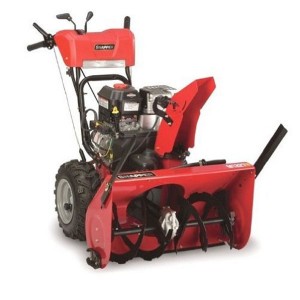 Not every winter is tough, with multiple days of subzero temperatures and severe snow storms. But when one comes though that is dropping record snow fall, you need to be prepared. There is nothing worse than trying to deal with serious winter weather without adequate tools. That is why you need to have a tough, heavy-duty snow blower in your garage that is ready to take care of whatever heavy snow fall might come your way.

Whether you have a long, unpaved driveway or live in an area that expects serious snow fall during the winter, you are going to want a two stage snow blower that is well equipped to take care of big jobs fast. It has to have a powerful engine that can support a wide, heavy-duty auger. You want a high snow cut depth and the ability to throw a large volume of snow in a short period. What you’re looking for is a snow blower like the Snapper 1696001.

The Snapper 1696001 is the kind of heavy-duty two stage snow blower you need when winter is dropping record amounts of snow fall in your area. With the Snapper 1696001, you will be well prepared for serious snow fall. That’s because the Snapper 1696001 has one of the most powerful engines you can find on a snow blower today. The engine supports not only an eight speed rear wheel drive, but also a powerful, durable steel auger that is ready to take care of whatever snow you might encounter. It doesn’t matter whether you are dealing with powder, slush, or densely packed, icy snow. The Snapper 1696001 can get right through them all.

The Snapper 1696001 has the kind of extra wide clearance that will allow you to finish big jobs fast. You can clear an entire sidewalk with the Snapper 1696001 in just a single pass. And you won’t have to make more than three or four passes to clear a one-car driveway. Because the Snapper 1696001 has such a high snow cut depth, it will be able to clear deep snow fall without getting slowed down. This is a serious snow blower made to handle tough conditions.

The Snapper 1696001 is a gas-powered, two stage snow blower. It weighs 265 pounds and has dimensions of 35.8 x 48.5 x 48.5 inches. It has a Briggs & Stratton four-cycle OHV engine with a displacement of 250 cubic centimeters. The engine has an electric start with a backup recoil cord. It powers both the auger and the eight speed rear wheel drive.

As soon as you take one look at the Snapper 1696001, you will know that you are dealing with a machine that is built for serious performance. The Snapper 1696001 is big – it has a larger intake than most snow blowers in its class – and it houses the kind of heavy duty steel auger that is going to have no trouble grinding right through whatever snow you might have to deal with. The auger is made of durable welded steel, and it’s serrated so that it can cut right through the densest snow out there.

The Snapper 1696001 is not just a big snow blower, either. You will certainly be impressed by all of the outstanding extra features it has to offer. Among them are an electric starter, a powerful halogen headlight so you can see what you’re doing on dark mornings, and a chute that rotates 200 degrees at the press of a button. Its control panel is ergonomically designed for easier use, and with its patented Free Hand design, you can use one hand to steer and control propulsion, leaving the other free.

The Snapper 1696001 also has a high performance aluminum gear case with a friction disc drive. The drive propels the snow blower with six forward and two reverse speeds – more than average, and enough to ensure you are always working at exactly the right pace for conditions on the ground. The Snapper 1696001 is really an outstanding snow blower, and the kind that you will be able to depend on when conditions are bad and snow is falling heavily. This is the snow blower you want to have in your garage when a serious storm hits.

The Snapper 1696001 is packed with great features that make it well equipped to handle just about anything that Old Man Winter might bring your way. It has a powerful engine driving one of the widest augers you can find on any snow blower today. It has the capacity to clear high volumes of snow in minutes. It’s got fantastic accessories designed to make your job much easier. And it is built out of extremely durable parts that will stand up to tough conditions for many years to come.

As you can see, the Snapper 1696001 is the kind of serious snow blower that is ready for just about any conditions on the ground. With one of the best engines you can get under the hood, the Snapper 1696001 packs plenty of snow removal power, and it can clear a big area of deep snow fall in minutes. It’s got everything you need to make clearing your driveway easier that never, and it is durably built so that it can stand up to the elements without ever breaking down or needing repairs.

But in spite of the fact that the Snapper 1696001 is such a fantastically designed and well built machine, there are a few areas in which it is not quite perfect. To be frank, most of these are typical to all two stage snow blowers, and the rest do not present the kind of serious problems that will affect its overall performance in any way. The wide clearance and powerful engine that the Snapper 1696001 has do more than enough to help you get big jobs done fast.

I think that you will probably agree that these are not the kind of serious concerns that could really take anything away from all for the great Pros the Snapper 1696001 ahs to offer. Most of them are quiet common to two stage snow blowers, and the one or two that are specific to the Snapper 1696001 are fairly minor. The machine’s powerful engine and extra wide clearance are what really matter. Those are the features that are going to help you get big jobs done fast.

Of course, the best way to figure out whether a particular snow blower is the right one for you is by comparing it to a few other models that are in its size class and price range. That way, you can get a sense for how that snow blower stacks up to others made by the competition, as well as a more nuanced understanding of what is typical in that class of snow blower. The following table compares the product specs of a few snow blowers. Let’s take a look.

As you can see, the Snapper 1696001 has the most powerful engine of the three models. As a result it is able to support a wider clearance and throw snow farther than either of the other two models. The Snapper 1696001 is also the only one with a headlight or a snow chute that rotates more than 180 degrees. And it boasts more forward speeds than either of the other models. I think it’s clear which one is the superior machine.

By now you should have a pretty clear idea of whether or not the Snapper 1696001 is right for you. This is a powerful, high performance snow blower that can help you get big jobs done in less time, and it has everything you need for convenient snow removal. But before you make up your mind to buy it, let’s take one more look at the Pros and Cons lists.

With one of the more powerful engines you can find on a snow blower today, the Snapper 1696001 is able to support a wider clearance and higher snow removal capacity than other two stage snow blowers. It’s packed with great accessories that will make your job easier, and it is built to last a long time.

Those few drawbacks that the Snapper 1696001 does have are fairly minor ones. While it’s big and not CARB compliant, that’s true for most two stage snow blowers. The other Cons likewise do not affect its overall performance in any serious way. All things considered, I think the Snapper 1696001 is an outstanding snow blower.

When you are trying to get through a tough winter – one with multiple days of severe weather and serious winter storms – you want to be sure you have a snow blower in your garage that you can depend on. It should have a great snow removal capacity, a powerful engine that can hold up to demanding jobs day after day, and a durable auger that can cut right through icy and densely packed snow easily.

That is the kind of snow blower the Snapper 1696001 is – it’s built for serious jobs. And it is not just big and tough, either. It’s designed thoughtfully, with plenty of accessories that will help make your job a lot easier. This is a snow blower that has everything you need when you have to tackle heavy snow fall on a big area. It’s a durable, high performance machine that is going to get the job done every time.

The Snapper 1696001 is not a cheap snow blower – it’s definitely above average in terms of its class. But as everyone knows, when you want real quality and serious performance, you don’t buy the budget model: you go for the best. And that is exactly what the Snapper 1696001 is. It’s packed with tons of great features that will help make clearing even the deepest snow an easy task. At the same time, the Snapper 1696001 is not an overpriced snow bower – considering what it has to offer, it’s actually quite reasonable. When you are behind the controls of this snow blower, you can tell that it is in a class by itself. And that is worth every penny.

Click the button to get the best deal for Snapper 1696001Check Price
Hey, nice to meet you!