This website is reader-supported. When you buy through links on our site, we may earn an affiliate commission.
Home » Reviews » Toro 38381 Review 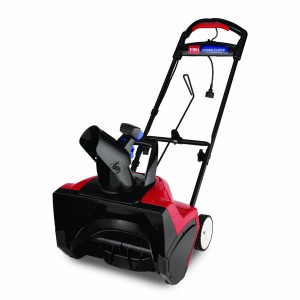 Unlike gas powered snow blowers, which produce as many carbon emissions in a half an hour of use as a car that is driven 35 miles, electric snow blowers produce zero emissions at the point of use. But many homeowners are reluctant to make the switch to electric because they are afraid these machines do not have the power necessary to keep their driveways clear. Fortunately, with a machine like the Toro 38381, which has a powerful 15 amp motor, extra wide clearance, and 12 inch snow cut depth, you get all of the power and performance you need.

The Toro 38381 is an electric snow blower with a 15 amp motor that provides enough power to allow the machine to move up to 700 pounds of snow per minute. It has an extra wide eighteen inch clearance, which will allow you to clear driveways faster and more efficiently. And it has a 12 inch high snow cut depth, which is one of the highest you can find on an electric snow blower. In spite of these dimensions, the Toro 38381 is still relatively compact and lightweight, which ensures that just about anyone will be able to use it with ease.

The drawbacks on the Toro 38381 are all fairly minor. Its starter mechanism can be a bit difficult to get used to, especially if you are trying to use it with mittens or thick gloves on. The machine’s wheels are somewhat small, which can make backing it up difficult. And while it has some difficulty with slushy, heavier snow, and the extension cord can be a bit of a hassle to operate, these issues are fairly common in electric snow blowers.

Compared to similar models, the Toro 38381 has one of the most powerful motors available, and has one of the higher capacities per minute for snow removal. It’s a bit expensive, but I think it is for the most part worth the price.

The Toro 38381 can throw snow up to 30 feet through its snow chute, which rotates manually 180 degrees. It has an ergonomically designed handle and compact wheels. The operator manually pushes the machine. It weighs 26 pounds. The Toro 38381 comes with a 2 year limited manufacturer’s warranty.

The Toro 38381 is designed to offer the highest standards in power and performance available on an electric snow blower today. It has a 15 amp series wound motor, which will make it universally functional with both AC and DC currents. The motor provides enough power to allow the auger to move up to 700 pounds of snow per minute, and it can throw that snow up to 30 feet away. This is one of the largest per minute capacities available on an electric snow blower, and it will allow you to handle big jobs more quickly than ever.

The clearance width on the Toro 38381 is eighteen inches wide, and the snow cut depth is 12 inches high. The eighteen inch clearance width will allow you to clear your driveway in the least amount of passes available on an electric snow blower, which will save you time and have you back indoors and warming up much more quickly. The extra high snow cut depth rivals those on single stage gas powered snow blowers, and it ensures that you will be able to tackle almost anything Mother Nature can send your way.

The wide clearance and extra high snow cut depth are packed into small dimensions, so you will have no trouble finding adequate storage space for the Toro 38381 or maneuvering it in tight spaces. And the snow blower weighs just 26 pounds, so just about anyone will have an easy time using it.

There are very few drawbacks to the Toro 38381; the starter system can be challenging to use, and the wheels are somewhat small. The power cord takes some getting used to, and the snow blower may struggle with very wet, heavy snow, but these are common issues in electric snow blowers. Overall, this is a very solid snow blower.

The Toro 38381 has a number of excellent features which make it one of the more powerful and high performance electric snow blowers available on the market today. It has a 15 amp series wound motor that allows it to clear up to 700 pounds of snow per minute. Its clearing width is 18 inches, and it has a 12 inch snow cut depth. In addition, the machine is compact and lightweight, and it is ergonomically designed.

The Toro 38381 offers more power than most other electric snow blowers can, and because of that it can move more snow in less time. It can handle big areas because of its extra wide clearance, and deal with the heaviest snow fall with its extra high 12 inch snow cut depth. It is compact and lightweight, so anyone can use it with ease, and it is designed to ensure your safety and comfort are paramount.

There are a few minor drawbacks to the Toro 38381. Because of its design, the starter mechanism can be a bit difficult to use. The wheels are rather small, which can present issues with maneuverability. Other than that, however, it has few drawbacks that are not common to the vast majority of electric snow blowers. There is the issue of its price tag being rather high compared to similar machines, but even still I think it’s reasonably priced.

I do not think that any of these drawbacks is serious enough to warrant a negative overall review, and I also don’t think any of them outweigh all of the excellent Pros described in the previous section. While the dual starter mechanism can be tricky, and the extension cord can be a hassle, you will get used to both of them over time. The problem of wet snow can be avoided by clearing it as soon as it stops falling.

In addition to looking at the Pros and Cons, I always strongly recommend doing some comparison shopping when you are buying a new yard machine, and this is especially true for an expensive one like the Toro 38381. It’s important to be sure that you are not needlessly spending too much money for a product when similar ones exist that are comparatively cheaper. The following table compares the Toro 38381 with the Toro 38025 and the Maztang MT988.

The Toro 38381 has the most powerful motor of the three machines, and it also has a higher snow cut depth, which can be very handy in heavy storms. The Toro 38381 and the Maztang throw more snow per minute than the Toro 38025. All three models have similar overall dimensions, clearing widths, throw distances, and weigh about the same. The Toro 38381 is more expensive than either of the other two models. All three have 2 year limited warranties.

While the Toro 38381 has one of the higher price tags for electric snow blowers of its size, I think that it’s reasonably priced. This is primarily because it has excellent Pros that make it such a powerful machine that can handle big storms and large areas easily, and few real Cons that cause any major concern.

The Toro 38381 has one of the most powerful motors available on an electric snow blower. It has an 18 inch clearing width and the highest snow cut depth on the market. In addition, it is compact and lightweight, so it will be easy to use, especially when you consider its convenient, ergonomic design.

While starting the motor can be a bit tricky because of the trigger and button system, it does ensure that it’s safer to operate. While the wheels are small, they are functional. Beyond the high price, all of the other drawbacks are rather common to see on electric snow blowers, and do not take away too much from the Pros.

When you are switching over to an electric snow blower, you are getting the advantages of a quieter, more environmentally friendly machine that doesn’t fill your clothes with fumes every time you use it. But you also do not want to lose anything in terms of power when you make the change. With the Toro 38381, though, this is not a trade off you have to make: this machine provides the kind of heavy duty power that you need to handle, big tough jobs. The Toro 38381 has a 15 amp motor that allows you to clear up to 700 pounds of now per minute, and it has the kind of extra wide clearance with which you can clear a big driveway in the minimum number of passes and the least amount of time. Because its snow cut depth is 12 inches, it’s comparable to single stage gas snow blowers, and you can be sure you will be ready for the most severe winter storms.

There are no two ways around it: the price tag on the Toro 38381 is one of the highest ones for an electric snow blower of its size and clearance width. You may be inclined to find a less expensive snow blower with comparable abilities, and I would not blame you one bit. But unlike some high priced electric snow blowers, I do think the asking price on the Toro 38381 is reasonable. That is because it has a heavy duty motor that will last a long time, a very high snow cut depth, and overall design that will make it easy to use in heavy snow fall.

Click the button to get the best deal for Toro 38381Check Price
Hey, nice to meet you!