This website is reader-supported. When you buy through links on our site, we may earn an affiliate commission.
Home » Reviews » Snow Joe SJ620 Review 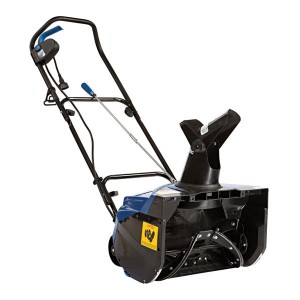 In the middle of a long winter, one of the things I think I can safely say that none of us looks forward to is clearing a heavy snow fall from our driveways or sidewalks, let alone digging out a car that is parked on the street and surrounded by deep snow. Getting this done by hand seems to take forever, and it is a task that can leave us exhausted, with sore backs and aching shoulders. And using a gas powered snow blower is a hassle all of its own: you have to make sure you have enough gas on hand, and then you have to deal with a noisy machine that is belching out emissions and filling your clothes with fumes and the atmosphere with pollution. Fortunately, you can have all of the benefits of a snow blower without the drawbacks when you opt for an electric snow blower like the Snow Joe SJ620.

The Snow Joe SJ620 is a plug in electric snow blower with overall dimensions of 45 x 19 x 38 inches, which means it will not be very difficult to find storage space for it in your garage or tool shed. It has an 18 inch wide clearance that allows you to finish medium jobs, such as two or three car driveways, sidewalks, and walkways quickly and efficiently. It has a snow cut depth that is ten inches high, which means you can use it on all but the worst winter blizzards without experiencing any loss of performance.

Unlike gas powered snow blowers, which make quite a racket and spew emissions and fumes as you use them, the Snow Joe SJ620 is quiet and environmentally friendly. It has a 180 degree chute control so you can decide which direction snow should be thrown. And it has five durable steel blades that can throw snow 20 feet and deal with tough conditions.

In addition to these excellent features, which I will discuss in more detail in the Pros section, there are a few minor performance issues the Snow Joe SJ620 deals with, which I will cover in detail in the Cons section. I’ll also provide a detailed product comparison guide, and discuss pricing in depth.

The Snow Joe SJ620 is a manually operated snow blower with no drive system. It has an ergonomic handle and compact wheels. Its chute is controlled with a handle and can turn 180 degrees. The snow blower weighs 31.5 pounds. It is covered by a manufacturer’s warranty for 2 years.

The Snow Joe SJ620 is an electric snow blower that is designed to handle big, tough jobs without needing fossil fuels to do it. Unlike bulky, noisy gas powered snow blowers, the Snow Joe SJ620 is very quiet, which your neighbors will appreciate if you have to clear a heavy snow fall early in the morning before you can go to work. And, it produces zero emissions at the point of use, which means you will be able to get all the benefits of a big, powerful snow blower without having to worry about increasing your household’s overall carbon footprint.

There are a few issues associated with the Snow Joe SJ620: it is a bit on the heavier side, which may make it more difficult for some users to operate. It may not be as powerful as you might expect a snow blower to be, and it tends to have a bit of difficulty clearing wet, heavy snow. It also may leave a thin layer of snow behind, which will require you to put down rock salt to melt it. But overall, I do not think any of these issues are significant enough to take away from the fact that overall the Snow Joe SJ620 is a solid, reliable machine.

There are a number of features that taken together make the an excellent electric snow blower to keep medium sized areas clear of even the heavier snow fall some regions of the United States experience. It has an 18 inch wide clearance that allows you to finish jobs efficiently. It has a 10 inch high snow cut depth that allows you to take care of bigger jobs. It is quiet and environmentally friendly, and it has durable parts.

Overall, these Pros add up to make one very impressive electric snow blower. It comes with the kind of clearance width and snow cut depth that will allow you to handle big, deep jobs quickly and efficiently. You can use it any time of day or night without disturbing your neighbors, and it allows you to direct snow where you want it and throw snow up to 20 feet away. Any one of these features would be great on its own, and taken together they are excellent.

On the other hand, there are a few areas in which the Snow Joe SJ620 does not perform quite as well as one would hope. Unlike gas powered snow blowers, it may struggle to throw wet, slushy snow the full twenty feet, and it is not quite as powerful as I would like. Its power cord can get in the way. And the snow blower tends to leave a thin layer of snow behind. It’s also a bit on the heavier side.

I should stress that while these Cons are important to discuss, so that you have a clear picture of what you are getting into with the Snow Joe SJ620, at the same time they are not so serious that I would recommend against purchasing this machine. While it is not as powerful as you might like, and it is a bit heavy, it still has a number of attractive advantages that make it one of the better electric snow blowers on the market today.

It is always a very good practice to do some comparison shopping when you are looking to buy a new home or garden appliance, especially when it is a big purchase as with an electric snow blower like the Snow Joe SJ620. This way, you can get a clear picture not only of what is out there but also a better understanding of how a given product stacks up when compared to its competition. The following table compares the Snow Joe SJ620 to the Maztang MT988 and the MTD 31A-050-706.

When you are shopping for a new snow blower, there are a number of important product specs to keep in mind. You want a large clearing width for the most efficient job possible. You also want a high enough snow cut depth so that you can handle whatever Mother Nature throws at you. Beyond that, you want a machine that is powerful and made of durable parts so it can provide quality performance over the long term. Let’s look at the Pros and Cons of the Snow Joe SJ620 before we wrap up.

The Snow Joe SJ620 has an 18 inch clearance width, which will allow you to finish clearing big areas in fewer passes and less time. And it has the kind of high snow cut depth that will allow you to take care of heavy snow fall with less effort. Beyond that, it is quiet and environmentally friendly, and has durable, high quality parts that will last for years.

The Snow Joe SJ620 does not have quite as much power as I would like to see on a snow blower, even an electric one, in spite of its 13.5 amp motor. It also may have difficulties with wet snow, and may tend to leave a layer of snow behind when you use it. It is a bit heavier than some users may prefer, and the power cord can be difficult to get used to. All things considered though, I think the Pros outweigh the Cons on this snow blower.

When you live in a region that gets a fair amount of snow fall over the course of the winter, and you have an average amount of space to keep clear – counting your driveway and sidewalks – you will want a snow blower that can get the job done quickly and efficiently with as little fuss as possible. A plug in electric snow blower like the Snow Joe SJ620 offers the kind of snow clearance width and snow cut depth that can deal with even the heaviest of snow falls quickly and efficiently. And unlike a gas powered snow blower, it is quiet, environmentally friendly, and easy to use: it barely needs any maintenance to keep it running well, and it will start up every time and always be ready to use. The Snow Joe SJ620 has all of the advantages of a gas powered snow blower with none of the drawbacks. It’s well made and convenient, and will provide reliable performance over the long term.

Click the button to get the best deal for Snow Joe SJ620Check Price
Hey, nice to meet you!