This website is reader-supported. When you buy through links on our site, we may earn an affiliate commission.
Home » Reviews » Ariens ST24LE Review 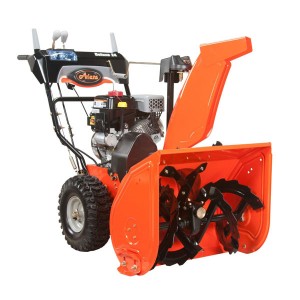 When winter hits, you want to have a snow blower in your garage that is prepared to take care of heavy snow fall quickly and efficiently. And if you live in a region that gets regular winter storms, you want a snow blower that is going to be able to stand up to repeated use over the long term without breaking down or needing to be serviced too often. Whether your driveway is wide and long or just your average one-car affair, you also want a wide clearance on your snow blower, so that you can finish clearing it in fewer passes and spend less time outdoors in the cold weather. If any of these conditions sound familiar, you want a powerful two stage snow blower that can take care of big jobs without batting an eye. And one of the best in this size class is the Ariens ST24LE.

The Ariens ST24LE is the kind of tough two stage snow blower that you want to have when a severe winter storm drops a heavy accumulation of snow on your area. It has everything you need to take care of big jobs quickly and efficiently, and it is built tough – so you know it is going to keep showing up for snow clearing duty day in and day out for many years to come. It is built of durable materials, and it has one of the highest quality engines you can find under the hood. That alone is a huge plus.

But there’s more: because it has one of the best engines on the market, the Ariens ST24LE is able to support the kind of serious snow clearing capacity that you just can’t find on other two stage snow blowers. It has an extra wide clearance that can get big areas clear in fewer passes, and it has a high intake designed to deal with big snow drifts as if they were nothing. There are very few drawbacks to the Ariens ST24LE and a whole lot of positive notes. This is really one of the best two stage snow blowers on the market today.

The Ariens ST24LE is a two stage gas powered snow blower that weighs 256 pounds and has compact dimensions of 38 x 26 x 30 inches. It has an electric push button start with recoil backup and a powerful 250 cubic centimeter Briggs & Stratton engine with overhead valve design.

In part because of its outstanding engine, the Ariens ST24LE boasts not only a six speed rear wheel drive, but is also able to support a clearance width that is two feet wide, as well as a snow cut depth that is 21 inches high. It can throw snow up to 35 feet through its 180 degree snow chute. It has a two year warranty.

When you first get the Ariens ST24LE out of its box, you will find that it doesn’t need a whole lot of assembly to get it ready to start clearing snow. It comes almost completely put together, and what little extra work needs to be done can be finished in a matter of minutes with regular household tools by following the easy to understand instructions that come with it. Once you get it all put together, you may be somewhat taken aback by how compact the Ariens ST24LE is: its overall dimensions are fairly small for a two stage snow blower that boasts the kind of clearance capacity that it has.

But don’t be fooled for a second: while the Ariens ST24LE is conveniently compact, it is able to clear a whole lot of snow really quickly. That’s because it has one of the widest clearances you can find on a two stage snow blower, and its powerful Briggs & Stratton engine allows the machine’s impeller fan to throw hundreds of pounds of snow per minute up to 35 feet away. Big winter storms have nothing on the Ariens ST24LE: this snow blower is ready for just about anything that could come your way.

That’s because it has a snow cut depth that is well above average, even for a two stage snow blower. Along with optional drift cutters, there is practically no amount of snow fall that the Ariens ST24LE won’t be able to take care of quickly. It’s also very convenient to operate: with six forward and two reverse speeds, maneuvering it around the driveway is like steering a baby carriage. The snow blower does all the work for you, at whatever pace is best for your needs. This is a great snow blower at an outstanding price, and it will serve you well for many years.

There is plenty to love on the Ariens ST24LE. It has one of the best engines you can find on a yard machine today. That engine supports both a self-propelled rear wheel drive that has six forward speeds, and a front auger that is two feet wide. The Ariens ST24LE is built from tough components that are going to last a long time, and it provides all of this in a relatively small package that’s easier to store.

As you can see, the Ariens ST24LE really has a lot to offer its owner. This is a snow blower that is designed to perform well over the long term. It is built tough, but it’s also very thoughtfully designed, which means it has everything you need to tackle deep snow drifts and clear big areas quickly and efficiently. This is one of the better two stage snow blowers you can find – and you get all of that at a very reasonable price, too.

There are a few areas where – in spite of all of its great features – the Ariens ST24LE could stand to see some minor improvements. Of course, some of these drawbacks are commonplace when it comes to two stage snow blowers like this one, but one or two others could certainly be perfected somewhat. But overall none of the Cons I could find on the Ariens ST24LE really present the kind of design issues that raise serious concerns.

As you can see, while the Ariens ST24LE could benefit from the addition of a few more accessory features, overall it is not really lacking in any of the categories that matter in terms of overall power or performance. It remains a snow blower with one of the best engines available under the hood; it still has an extra wide clearance and a great capacity. Overall, I think you’ll agree that this is still an outstanding snow blower.

Of course, you can only glean so much information from Pros and Cons lists, no matter how detailed or well researched they might be. They can tell you a lot about an individual snow blower, but the only way to get a good picture of how it stacks up to similar models made by its competitors is to do some comparison shopping. The following table compares the Ariens ST24LE with two similar models made by Husqvarna and Yard-Man.

As you can see, the Ariens ST24LE has the smallest ratio of overall dimensions to engine size and clearing width. It’s an efficiently designed machine – and it has durable parts, a Briggs & Stratton engine, and big wheels. It doesn’t weigh too much or take up too much room, but it is able to hold its own compared to the hulking Husqvarna or the smaller Yard-Man. The Ariens ST24LE is clearly one of the best machines in its class.

By this point, I think you will probably agree that the Ariens ST24LE is a solid purchase. But I think it is important to be as thorough as possible before you decide to buy it, and with that in mind, it is a good idea to go over the Pros and Cons lists one more time, just to be completely certain.

With one of the best engines in the world, the Ariens ST24LE is able to support a serious clearance width that will allow you to finish clearing your driveway more quickly than ever. But it is also a compact, well designed machine that is as easy to store as it is to operate. Best of all, it’s built to last.

None of the Cons associated with the Ariens ST24LE can really take away from all of its positive aspects in any meaningful way, as far as I can see. Most of these are common to two stage snow blowers, and those that aren’t are fairly minor concerns. Overall I think the Ariens ST24LE is a great snow blower with a lot to offer.

And the Ariens ST24LE is a great one. This snow blower is compact and reasonably priced, but it also packs all of the snow clearing capacity you could possibly want to keep your driveway clear all winter long. It has tons of great features, a powerful engine, and durable parts – and it has a wide enough clearance and high enough snow cut depth that you should have no trouble clearing big jobs quickly and efficiently.

Best of all, the Ariens ST24LE is not one of these overpriced snow blowers that are too expensive for homeowners to afford. If you aren’t hiring a professional company to do your landscaping and snow removal, you probably aren’t ready to spend thousands of dollars on a two stage snow blower. Fortunately, you don’t have to. The Ariens ST24LE is designed to give you all of the snow clearing capacity you need – without putting too much strain on your bank account. And that’s good news, especially in this economy. This is a great snow blower at a great price, as anyone will agree.

Click the button to get the best deal for Ariens ST24LECheck Price
Hey, nice to meet you!