This website is reader-supported. When you buy through links on our site, we may earn an affiliate commission.
Home » Reviews » Murray 1696030 Review 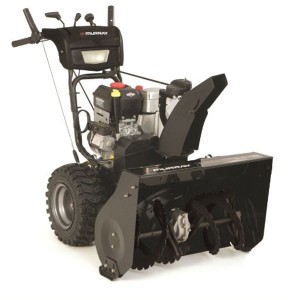 Heavy snow fall calls for heavy duty snow blowers – you do not want to have a flimsy single stage snow blower in your garage when a serious snow storm drops a lot of snow in your area. You want to have the kind of powerful two stage snow blower that is going to be equipped to take care of more than twelve inches of snow. And you want to be able to finish the job as quickly as possible and get back inside – especially when temperatures are dropping well below zero. That means an extra wide clearance that will be able to get your driveway clear in as few passes as possible. The Murray 1696030 is just that kind of snow blower: it has a powerful engine supporting a wider clearance and higher snow cut depth than you can find on most other snow blowers today. It’s prepared for just about anything.

The Murray 1696030 is the kind of serious snow blower that is not afraid to take on anything that Old Man Winter might bring your way this winter. With a powerful engine manufactured by one of the bets companies in the business, durable frame and heavy-duty auger, this snow blower is equipped to tackle heavy snow fall under the toughest conditions. And because it has an extra wide clearance, you will be able to finish clearing your driveway in as few passes as possible. Plus, its snow cut depth is high enough that there is almost no snow drift too deep for it.

The Murray 1696030 has a four cycle engine that powers not only its auger but also an efficient transmission that provides six forward and two reverse speeds. That means you will always be able to be clearing snow at whatever pace is best suited to your own needs as well as conditions on the ground. It does not matter whether you are clearing dense, icy snow; light, powdery snow; or heavy, slushy snow. The Murray 1696030 is ready for all of it. It can throw snow farther and finish jobs faster than just about any other snow blower on the market today.

The Murray 1696030 is a gas powered two stage snow blower with a Briggs & Stratton engine that has a displacement of 305 cubic centimeters. It has overall dimensions of 37 x 50.9 x 32 inches and weighs 294 pounds. The Murray 1696030 has a self-propelled rear wheel drive that has six forward speeds and two reverse.

The clearance width on the Murray 1696030 is over two feet wide, and the snow blower has a snow cut depth of 21 inches, making it well equipped to handle large amounts of snow quickly. It can throw snow a full 35 feet away through its manual snow chute, which rotates 180 degrees. It has big wheels designed for better traction. The Murray 1696030 comes with a 2 year warranty.

As soon as you lay eyes on the Murray 1696030, one thing will be very obvious: this is a snow blower that definitely means business. The Murray 1696030 has one of the most powerful engines you can find on any snow blower on the market today, and the engine is made by one of the most trusted manufacturers in the world. Because it has such a solid engine, the Murray 1696030 is able to support not only an extra wide auger that can move huge amounts of snow very quickly, but also a drive train that provides extra forward and reverse speeds.

The Murray 1696030 is solidly built, too: its auger is made of durable welded steel that allows it to cut through densely packed, icy snow without getting bogged down or suffering any damage, even if you use it regularly over the long term. The body of the Murray 1696030 is likewise made from durable stamped steep that is impact resistant and will hold up to lots of wear and tear over the long term. And with big, solid wheels that are designed to resist slipping and provide more traction, there is no surface you can’t clear with the Murray 1696030, whether paved or unpaved.

The Murray 1696030 is such a great snow blower because it is packed with excellent features that are designed to provide high performance in the face of the toughest conditions out there. This is a snow blower that is built to take care of big jobs fast, and that is apparent as soon as you hear its powerful Briggs & Stratton engine roar to life and watch its auger cut through dense snow with no trouble. Let’s take a look at some of its more impressive features.

As you can see, the Murray 1696030 has everything you need to tackle big jobs without any trouble at all. It is designed to clear deep snow fall from big areas in less time than other snow blowers can. And the Murray 1696030 has the kind of powerful engine backing that clearance up that will ensure you never run out of power or have any trouble moving snow – even dense or slushy snow. This is one outstanding snow blower.

Even with all of its great features, there are a few areas in which the Murray 1696030 is not quite as perfect as it could be. While there are areas that could stand to see a little bit of improvement, though, most of them are very minor issues that really do not take away from the overall performance or ability of the Murray 1696030 in any meaningful way. Still, I think we should cover them to be thorough.

As you can see, there is nothing in the Cons section that can really take away from all of the great Pros that the Murray 1696030 has to offer its operator. Nothing I saw really presented any problems in terms of overall performance. The Murray 1696030 still has everything it needs to take care of heavy snow fall on big driveways very quickly and efficiently. As a result, I will still be giving this snow blower a very high rating.

Of course, the very best way to get to know whether a given snow blower is the best one for you is by doing a bit of comparison shopping. That way, you can get a good sense of how it stacks up to other snow blowers made by the competition, as well as a better feel for what is standard in a given class of snow blowers. The following list compares the Murray 1696030 to two similar models.

By now you are probably just as enthusiastic about the Murray 1696030 as I am: with its outstanding features and great performance and capability, there is a lot to like here. But before you decide that this is the right snow blower for you, let’s take one more look at the Pros and Cons lists.

There are a lot of great features on the Murray 1696030. With its high performance engine, it is able to support an extra wide clearance and has a higher capacity than most two stage snow blowers on the market today. With durable parts and great design, this is an outstanding snow blower.

And there really is not much to complain about on this snow blower. The few issues I did have with it are not related to its durability, design, or ability to clear high amounts of snow quickly. And many of these are common to big two stage snow blowers. Overall, I think it is still an outstanding model.

It is important to be prepared for whatever winter might bring your way. You never know if this is the year that is going to bring record snow fall and freezing temperatures, and when that happens, you do not want to be caught with a snow blower that is not ready to perform under pressure. You want to have one that is built from durable parts, has a powerful engine, and is ready for anything.

The Murray 1696030 is that kind of snow blower. With one of the best engines money can buy, an extremely wide clearance and the kind of high snow cut depth that can make huge snow drifts disappear quickly, it has everything you need to take care of big jobs fast. The Murray 1696030 is a high quality snow blower that will perform well over the long term.

Best of all, the Murray 1696030 is surprisingly inexpensive. Given that it has one of the best engines you can find in a yard machine today, as well as durable parts, great design and outstanding snow removal capacity, one would expect it to be considerably higher priced. But it isn’t. The Murray 1696030 has one of the more reasonable prices you can find on a two stage snow blower today. And in today’s economy, that is very good news. It means you can get a high performance snow blower in your garage without spending your entire yard and garden budget for the year.

Click the button to get the best deal for Murray 1696030Check Price
Hey, nice to meet you!