This website is reader-supported. When you buy through links on our site, we may earn an affiliate commission.
Home » Reviews » DuroStar SD1300 Review 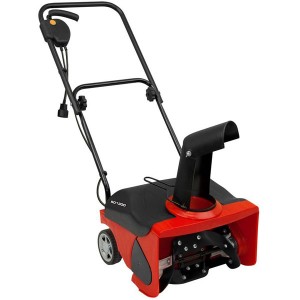 If you do not have a particularly big driveway to keep clear of snow during the winter, it does not make a whole lot of sense to buy the kind of big, expensive snow blower that will be difficult to operate. This is especially true if you live in an area that does not experience the kind of very heavy snow storms that occur in some regions of the country. With a few exceptions, most of the United States rarely gets snow fall that is deeper than several inches, and so you probably don’t need a model that has an overly tall snow cut depth. If any of this sounds familiar, you can save yourself a lot of time and energy by opting for a smaller electric single stage snow blower like the DuroStar SD1300. It has everything you need to keep your driveway clear in a very small package.

The DuroStar SD1300 is the kind of compact, simple snow blower that is perfect for clearing smaller areas of light to moderate snow fall. While this is not a snow blower that is ideal for dealing with serous snow fall, clearing unpaved areas, or dealing with very large driveways, it has a lot of excellent applications. If you are looking for a snow blower that will be able to keep a small one-car driveway clear, the DuroStar SD1300 is perfect. It is also great for clearing walkways, patios and decks. Because it doesn’t weigh too much, you should have no trouble carrying it up a short flight of stairs to clean off your porch as well.

The DuroStar SD1300 is an electric single stage snow blower that weighs just 36 pounds and has compact overall dimensions. It has a 9.7 amp motor, which provides enough power to drive it through moderate snow fall. It can clear up to 9 inches of snow at a rate of 500 pounds per minute.

With a clearance width of sixteen inches, the DuroStar SD1300 will be able to clear your driveway fairly quickly. It can throw snow up to 25 feet – far enough to efficiently clear most driveways. Its manual snow chute rotates up to 180 degrees. The DuroStar SD1300 comes with a 1 year warranty.

Once you get the DuroStar SD1300 unpacked and finish putting it together – which involves nothing more than attaching the handle and snow chute and takes a few minutes – you will be impressed b how efficiently designed it is. For a single stage snow blower with a sixteen inch wide clearance, it has a fairly small overall footprint, and it doesn’t weigh very much, either. That means it will be easier to find adequate space for it in your garage or tool shed, and it will also not be at all difficult to lift it over a curb or carry it up and down porch steps.

The DuroStar SD1300 is perfect for taking care of smaller areas that have a moderate accumulation of snow fall. If all you have to take care of is a shorter driveway and a few walkways, this is the perfect snow blower for you. As an alternative to big, noisy gas powered snow blowers, the DuroStar SD1300 is great. It is very user-friendly, runs very quietly and never produces any harmful carbon emissions. But it still can clear an impressive amount of snow per minute, and it can throw snow clear of most driveways easily.

For the right circumstances, the DuroStar SD1300 has everything you need to get the job done. It is lightweight and compact, and perfectly designed to keep smaller driveways clear of snow all winter long. It never produces any emissions and it is more cost effective than gas powered snow blowers. It is user friendly and very easy for anyone to operate. And it is well built and will last many years. Here are some of its best features.

The DuroStar SD1300 really has everything you need to keep a short driveway and walkways cleared of snow all winter long. This is a great little snow blower with lots of outstanding features that are designed to make your job a lot easier. It is well made, ergonomically designed and built to hold up for many years, even under tough conditions. For the homeowner with the right conditions on the ground, the DuroStar SD1300 is a great snow blower.

Because the DuroStar SD1300 is designed for a fairly specific set of conditions, it is not going to perform as well if you try to use it to clear a huge driveway or deal with more than a foot of snow. These are not drawbacks per say, but limitations on what it is designed to do. Still, you should be aware of the drawbacks that it has before you buy it. Let’s take a look.

So as you can see, none of the Cons I could find for the DuroStar SD1300 are serious design flaws, or point to anything lacking in the manufacture of the machine. Instead, they simply indicate what the DuroStar SD1300 is designed to take care of. If you are using this snow blower to clear moderate snow fall from an area that is not too big, I do not expect you to have any serious problems with it.

Because the DuroStar SD1300 is designed to take care of a fairly specific set of conditions, it can be hard to get a sense of what it is really capable of unless you compare it to some other, similar models. This kind of comparison shopping is really the best way to get a good sense of whether or not a particular snow blower is in fact the best model for your needs. The following table compares important product specs of the DuroStar SD1300 and two similar models.

The DuroStar SD1300 has a lot to offer to the homeowner with the right conditions on the ground. If you aren’t already convinced that it is perfect for a household that doesn’t get a lot of heavy snow fall and has a smaller area to keep clear, I think you may want to take another look at the Pros and Cons lists.

Because it is so lightweight and compact, the DuroStar SD1300 is not only easy to operate, but also perfectly designed to handle smaller driveways quickly and efficiently. You will never produce a single carbon emission when you are using it, and you will save a lot of money you would otherwise spend on fuel and maintenance as well.

While the DuroStar SD1300 has a short snow cut depth and a limited range, that is mainly because it is designed specifically to take care of light accumulations of snow on a smaller property. And if those are the conditions you are dealing with, then it is probably perfect for you.

When you own a modestly sized property in an area that does not routinely get blanketed with heavy snow fall, there is no reason to spend a lot of reason on a big, expensive snow blower designed to deal with blizzard-like storms on giant areas. Instead, you can save a lot of money – both up front and over the long term – by getting a compact, efficient electric snow blower like the DuroStar SD1300.

The DuroStar SD1300 has everything you need to keep a short driveway cleared of moderate snow fall all winter long. It is efficiently designed and well made, and it won’t ever let you down. It can handle up to nine inches of snow – which is more than most areas in the United States get in a single storm. And it can move up to five hundred pounds a minute. Best of all, the DuroStar SD1300 doesn’t produce any emissions.

The fact that it is great for the environment isn’t the best part of the DuroStar SD1300. That would be the price tag. The DuroStar SD1300 is much less expensive than the average single stage snow blower. It has the kind of extremely reasonable price that makes it almost more expensive not to get it. That is because the DuroStar SD1300 is not just going to save you a lot of money on the front end. You also will save lots of money over the long term because it is so inexpensive to own and operate it. This is a great little snow blower at an excellent price.

Click the button to get the best deal for DuroStar SD1300Check Price
Hey, nice to meet you!